It’s hard to forget your first time seeing the Rebel Snowspeeders race across Hoth -- scouring endless miles of snow in search of Luke and Han. The incredible sound they make as they glide effortlessly over ice-clad mountains stays with you. When taking the battle to the massive AT-ATs trying to destroy the power generators, we see the Snowspeeder’s compact design, quick maneuverability, and (very convenient) harpoon tow cable prove to be perfect foils for the Empire’s lumbering, four-legged war machines. That awesome scene firmly cemented the Rebel Snowspeeder in the hearts of Star Wars fans everywhere. Today we’re going to revisit the snow-covered history of that beloved vehicle – a history that started way back in 1980 and continues today with the new 6-inch scale The Black Series Snowspeeder.

1980: The Empire Strikes Back – Rebel Snowspeeder

Released as the Rebel Snowspeeder and painted in the grey Rogue Leader markings of the vehicle piloted by Luke Skywalker and Dak Ralter, the original Snowspeeder included some incredible features. With electronic light and sound effects, a detachable tow cable, working canopy, and spring activated landing gear, the first entry in the Snowspeeder’s lineage was so well done, it would be reproduced with little change for years to come. It came in multiple pieces and required assembly and decal application, which was a fun bit of extra entertainment before the toy was ready to play with. Originally released as part of The Empire Strikes Back line in 1980, the Snowspeeder saw a package refresh in 1982 with a different color background and, again a few years later, with a The Return of the Jedi logo following that film’s release.

1996: The Power of the Force – Electronic Rebel Snowspeeder

The 1980 Snowspeeder was reproduced in 1996 with the release of the all-new Power of the Force line. Mostly original tools were used, but the vehicle did receive updates in the form of new deco, movie-inspired sound effects, and a larger harpoon gun. The new deco on the 1996 version featured battle damage, and the more common red paint scheme seen, for example, on the Rogue Two version of the vehicle that found Luke and Han after a chilly night out on Hoth. This is the last time a Snowspeeder would include electronic light and sound features.

2002: The Power of the Jedi – Luke Skywalker’s Snowspeeder

The original was again released, this time under the Power of the Jedi line in 2002, as a retailer exclusive featuring the first Dak (misspelled Dack on the package) Ralter action figure. It was packed out in diorama packaging that featured the Snowspeeder crashed on Hoth. This time around, the electronic light and sound features were removed, and the battle damage deco was applied even more heavily. The larger harpoon gun from the 1996 release was replaced with the smaller, more movie-like version that was included with the original 1980 Snowspeeder but did not include the detachable tow cable that came with previous releases.

Battle damage was greatly toned down for this official release of the Rogue Two Snowspeeder from the Hoth rescue scene. It was presented in a diorama style box and included the first Zev Senesca action figure ever available. The Zev figure had a great amount of detail and featured a removable helmet. A few updates were added to this version of the Snowspeeder in the form of flip-up air brake flaps at the rear of the vehicle, and additional engine details. 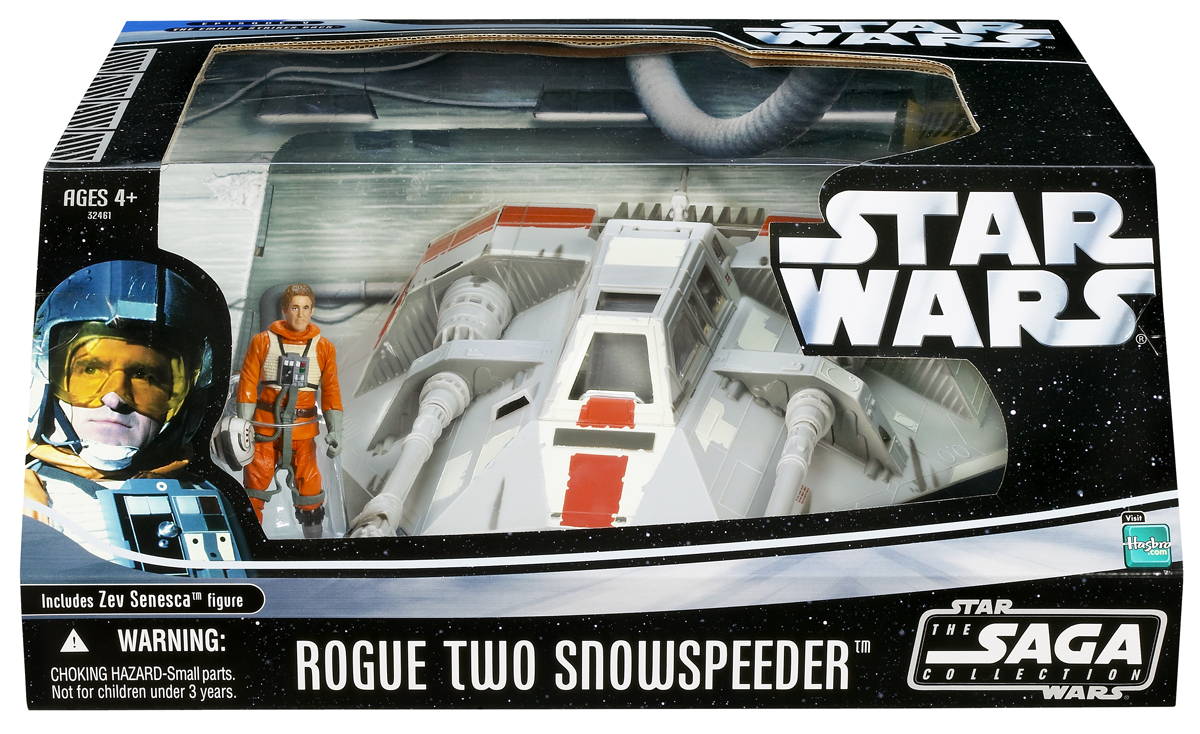 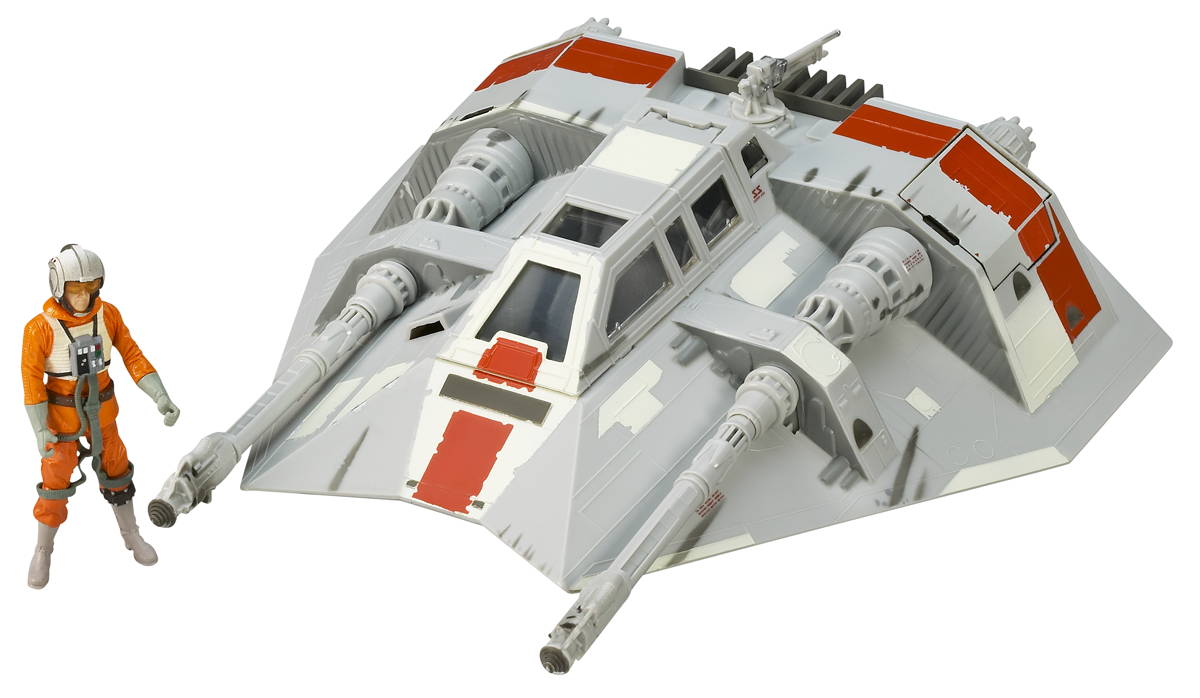 It’s worth mentioning that until 2009, no Luke Skywalker Snowspeeder pilot figure had ever been released. We had Dak Ralter from 2002’s The Power of the Jedi, and Zev Senesca from 2006’s The Saga Collection, but no Luke. This changed with his addition to The Legacy Collection. 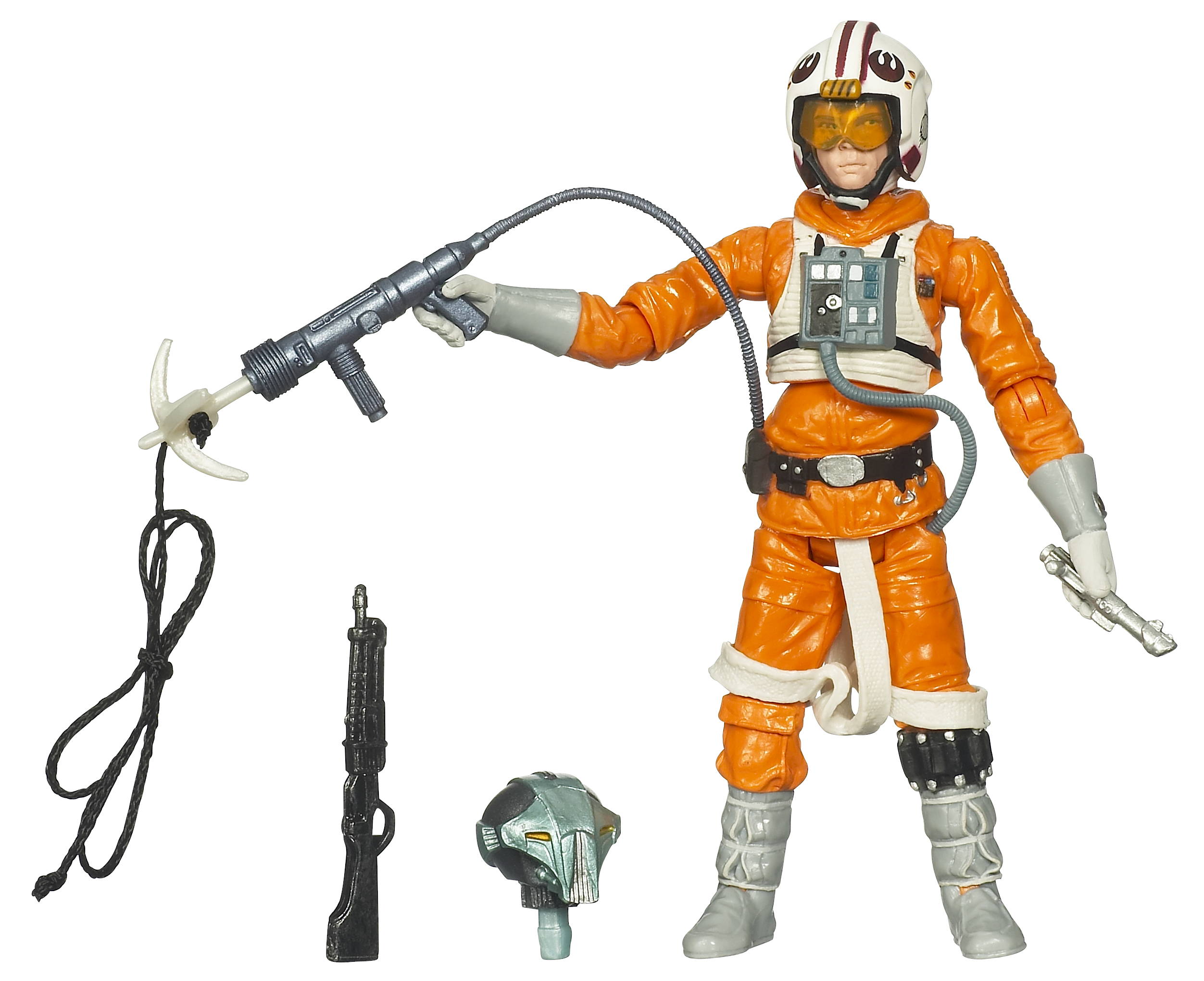 In 2010 the Snowspeeder got a full overhaul for The Vintage Collection, and the Clone Wars line. CAD files from the Lucasfilm theatrical re-release of The Empire Strikes Back were provided by Industrial Light & Magic to use as reference, giving the vehicle screen-accurate updates, and scale that was true to the action figures. New toyetic features were also added to enhance play in the form of swappable weapons that could convert the Snowspeeder from movie-accurate, to a missile launching play pattern, adding appeal for younger fans and collectors alike. The battle damage seen on previous releases was removed for a clean presentation of the vehicle, and for the first time, interior details were added to the cockpit on both the front and rear-facing sections. Manually operated landing gear was added, and the tow cable now included a rear compartment to neatly store it away. This version of the Snowspeeder was also released in Clone Wars packaging. 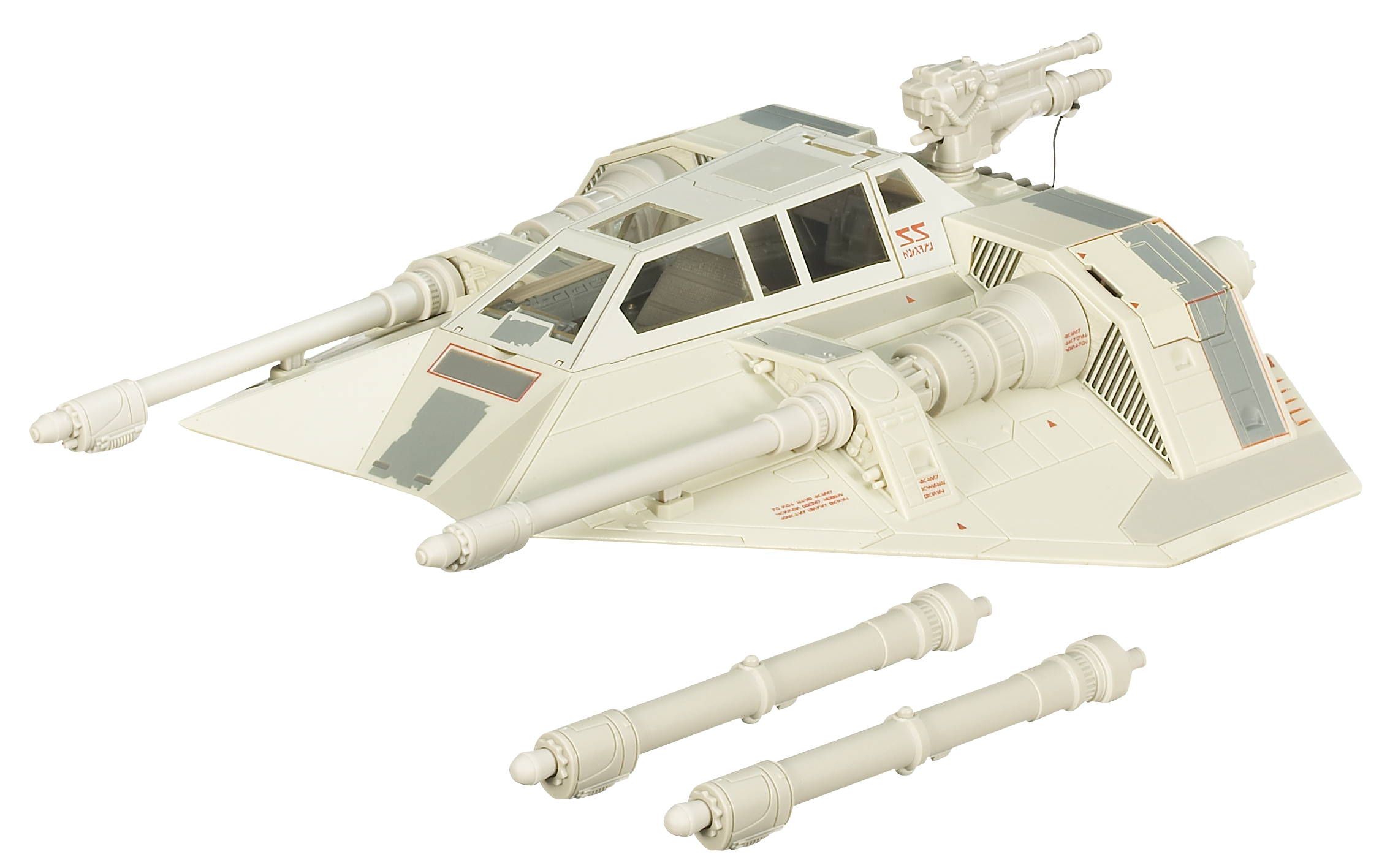 The all-new Black Series Snowspeeder is the culmination of 40 years of toy and movie history, brought to life with the most screen accurate detail to date. The Vintage Collection Snowspeeder was the inspiration for this version, with many of its features carried forward here. Newly provided photo reference of the cockpit was used to add detail that has never been seen before, including storage for removable thermal detonators, a grappling hook, controls, and targeting displays. Other new features include articulated air brake flaps on the bottom rear, and doors to hide the landing gear when in flight position. For deco, the weathering and battle damage is at an all-time high in terms of realism and screen accuracy. Finally, it includes an accompanying Black Series Dak Ralter figure, ready to take on the whole Empire himself. 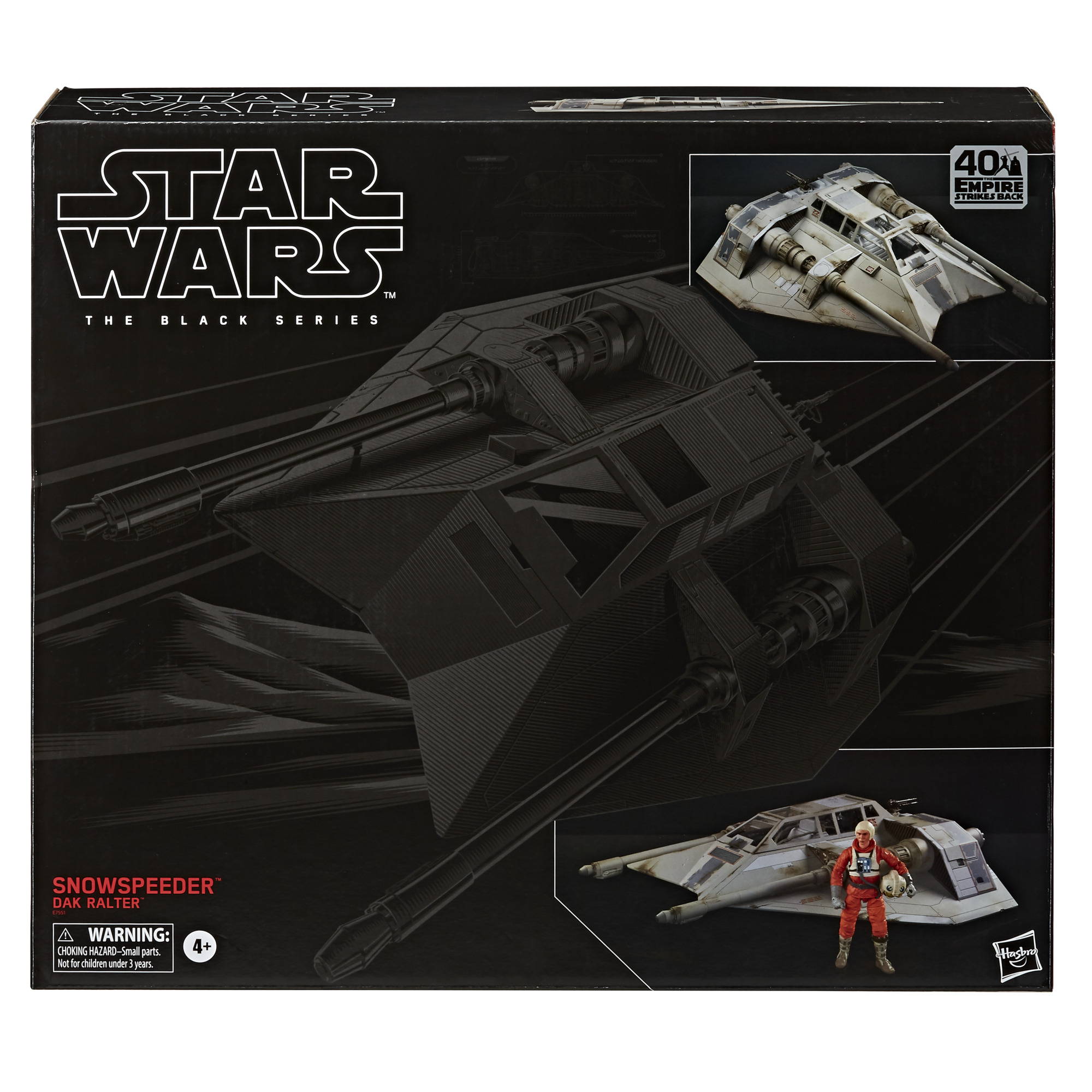 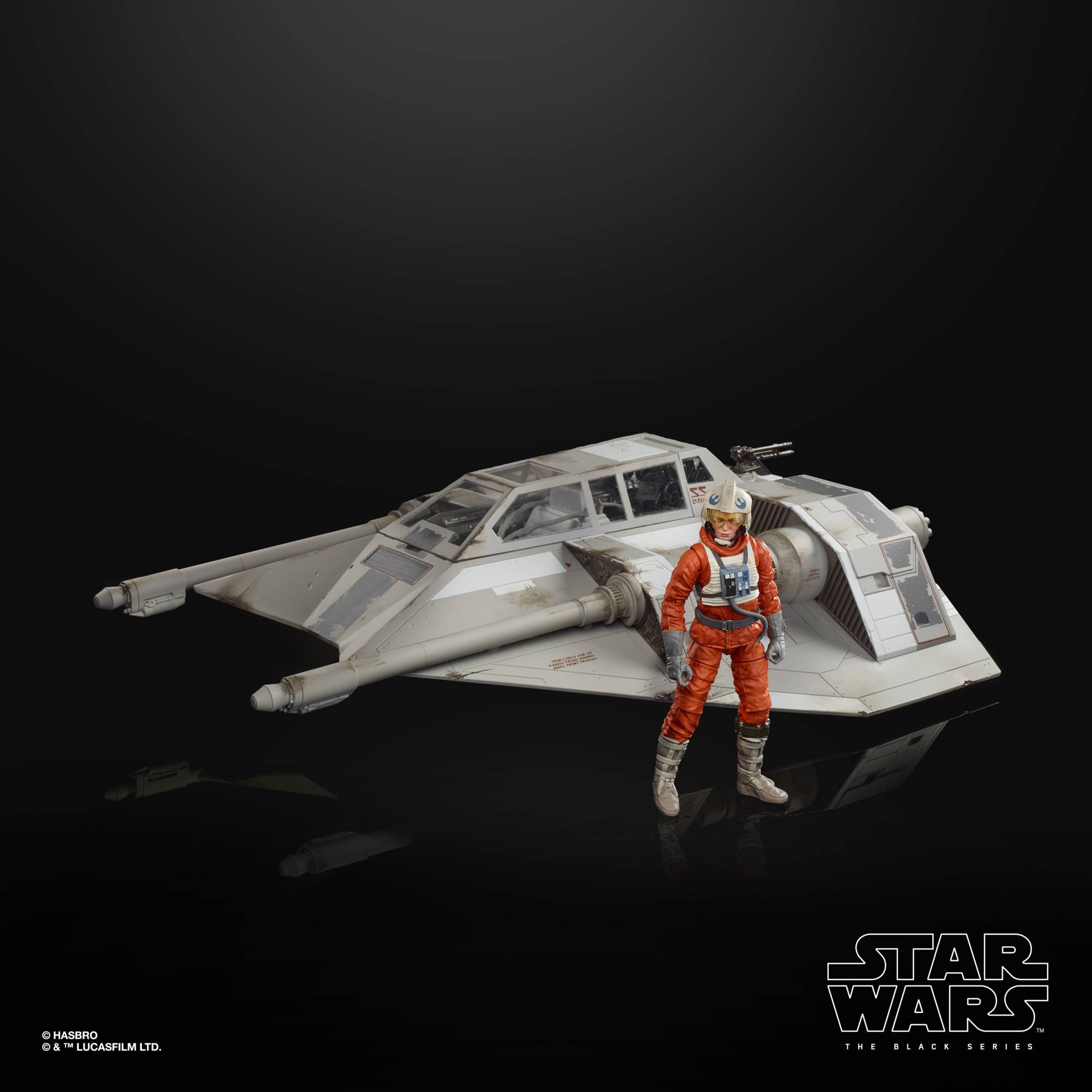 And there we have it, the iconic Snowspeeder through the years, as told through the toys we love. Thanks for taking this trip into the past with us, and we hope you are as excited as we are for the latest entry in the Snowspeeder’s long, frozen history.