The Devourer of Worlds. He Who Hungers. A living embodiment of entropy and survival. A universal constant. A force of nature. Hasbro Pulse proudly presents the next fan-funded HasLab project: Marvel Legends Galactus!

A near-omnipotent being who must consume entire planets to survive, Galactus cares not for the lives doomed by his hunger. His is a power beyond mortal understanding…and an appetite without limit.

From the depths of the Marvel Cosmos, one of the most iconic characters in comic book history has arrived as the next Marvel Legends HasLab project. Galactus is a truly out-of-this-world figure in and out of the Marvel Universe, and here you will have a chance to help bring him to life.

Hasbro Pulse invites you to join us in bringing the Great Devourer to our world, with all the features and detailing you know and love from the Marvel Legends Series. At a staggering 32” tall and covered in intricate LED-enhanced detail, he’s the largest and most complex Marvel Legends figure ever:

Hasbro Pulse UK is offering you the opportunity to back the proposed Crowdfunded Product MARVEL LEGENDS GALACTUS 32 – inch (812.8mm) (“Crowdfunded Product”) for £399.99 including VAT and free delivery. The project backing period for this campaign will commence on 16th July 2021 and we will stop accepting backers at 23.59 GMT on 30th August 2021. If the HASLAB MARVEL LEGENDS GALACTUS 32 – inch (812.8mm) campaign reaches its minimum goal of 14,000 backers by expiry time and date of the project backing period, your submission will become an order and your eligible payment method will be charged. The Crowdfunded Product will then go into production. Orders are estimated to be delivered no later than November 2022 and within 2-3 business days from notification of dispatch. Delivery to the United Kingdom only (excluding Channel Islands, Jersey and Guernsey). We cannot deliver to P.O. Boxes. Please read our Terms of Use and Privacy Policy for further information. © 2021 HASBRO. All Rights Reserved. 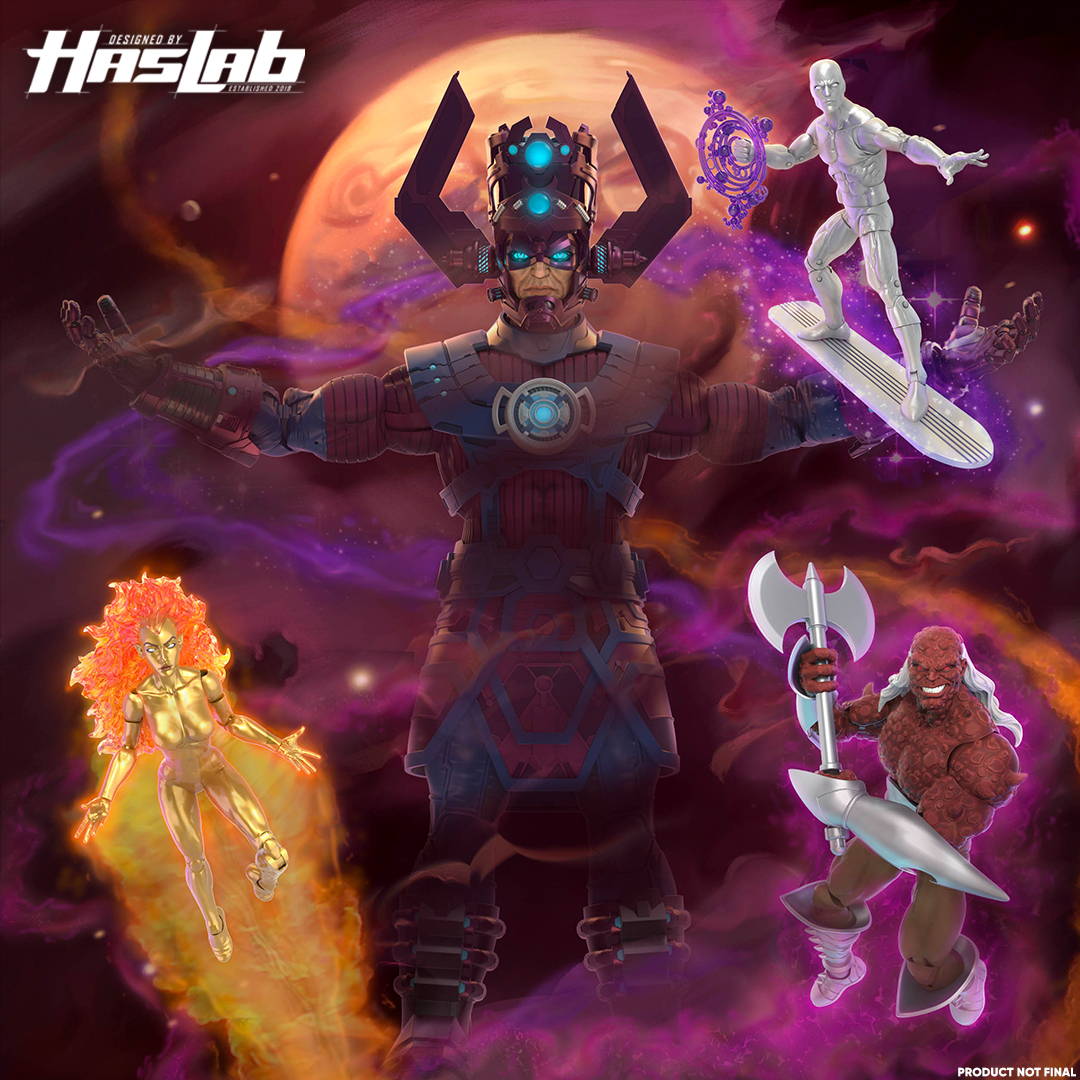 THE DEVOURER OF WORLDS

We can think of few characters more worthy of the HasLab treatment than Galactus, and with your help, we’re going to do him justice!

Galactus’ status as an icon of the Marvel Age was all but instantly cemented with his first appearance in Fantastic Four #48-50 (1966). The so-called Galactus Trilogy represents the zenith of Stan Lee and Jack Kirby’s creative partnership, a genre-defining achievement that ushered in the Marvel Age of Comics.

To fully fund the project and satiate Galactus’ mighty hunger, we need to hit 14,000 backers. And we don’t want to stop there. The team has prepared some stretch goals to unlock.

“THE COMING OF GALACTUS!”

This 32-inch (812 mm) Marvel Legends Galactus figure is the biggest Marvel Legends figure ever made, surpassing even the mighty Haslab Marvel Legends Sentinel figure! With a frame consisting of +300 pieces, it’s also one of our most intricate.

Featuring over +70 points of articulation (with 20 in each hand alone!), this figure is entirely posable and will make a cosmic addition to any display.

LEDS on the head and chest convey Galactus’ overwhelming cosmic power. He also comes with 2 alternate faceplates. The first allows the big guy to go from his usual stoic expression to a mask of rage. Best of luck to any Marvel Legends figures who get in his way! The second features a skeletal face in the style of the fan-favorite Marvel Zombies comic book series.

Though he no longer wears a giant G on his chest, Galactus’ appearance has remained largely true to Jack Kirby’s original designs. There were certain elements, such as the interlocking lines of his armor and that awesome helmet, that we knew we had to truly nail. From his intricate costume to his distinct square irises and that stoic, glowering expression, our hunger for perfection knew no bounds! Alongside Kirby we took inspiration from a host of passionate and talented artists who have contributed to the cosmos of the Marvel Universe. Building and designing Galactus from the ground up, we’ve created a truly massive and awe-inspiring figure to join your Marvel Legends collection!

There’s no time to waste! The Great Devourer approaches, and only your support can quench his legendary hunger! Lend your support to the Planet-Eater and claim your own Marvel Legends Galactus figure! Nuff said!