This campaign will move into production when it reaches its minimum backing goal. We will stop taking backers at 04:59 AM BST on August 16th 2022
Delivery Policy Return Policy

Never before has an undertaking such as this occurred – our project is the first 6-inch scale G.I. Joe Classified Series Cobra H.I.S.S. vehicle for which everyone has been clamoring. A mere £299.99 grants backers the base offering of my technological wonder, the H.I.S.S., as well as a highly-articulated Cobra H.I.S.S. Driver Action Figure with premium deco, detailing, and articulation for poseability. The vehicle itself contains an astounding level of detail and features allowing for myriad posing and display options.

The recently-foiled machinations of Cobra Commander to melt the polar ice caps have severely impacted funding at M.A.R.S. (Military Armaments Research Systems) Industries. I have the plans, but not the means to produce an unstoppable fleet of armored vehicles that would surely crush the forces of G.I. Joe under its mighty treads. Out of his usual incessant prattling came the germ of an idea from Cobra Commander that may provide the necessary capital to make these designs a reality. His latest scheme is to appeal to the masses themselves and have them finance it for us. It is quite diabolical, actually, as I have found “a fool and his money are soon parted.”

As a result, M.A.R.S. Industries has subcontracted HasLab, who were unwitting accomplices in our Cobra Hack of the G.I. Joe Skystriker campaign, to crowdfund the production and distribution of the first-ever G.I Joe Classified Series Cobra H.I.S.S. (High Speed Sentry) vehicle in 6-inch scale. They will carry the water to realize my genius. They need to reach 8,000 backers to officially fund the project. This HasLab campaign begins June 29th and ends in 47 days, at 04.59AM BST. If funded, they anticipate final delivery in December of 2023.

Never before has an undertaking such as this occurred – our project is the first 6-inch scale G.I. Joe Classified Series Cobra H.I.S.S. vehicle for which everyone has been clamoring. A mere £299.99 grants backers the base offering of my technological wonder, the H.I.S.S., as well as a highly-articulated Cobra H.I.S.S. Driver Action Figure with premium deco, detailing, and articulation for poseability. The vehicle itself contains an astounding level of detail and features allowing for myriad posing and display options.

The H.I.S.S. vehicle contains battery-powered interior and exterior LED lighting features. At the push of a single button, you can turn on the H.I.S.S.-vision lights, the interior cockpit heads-up display, headlights, fog lights, rear Cobra convoy lights, and, most impressively, the Cobra Insignia Beacon. This unique invention of M.A.R.S. Industries projects the Cobra logo on the ground ahead of the vehicle.

I’ve teamed with Dr. Mindbender to enhance this projection with his special combination of “illuminator intimidator” rays that will surely send the Joes cowering in fear should they cross the path of the beams. A secondary red LED light illuminates the rear cargo space to preserve any troopers’ night vision when the door is lowered, and they deploy.

Only my technological brilliance could possibly have engineered the state-of-the-art weapon accessories and design achievements offered by the G.I. Joe Classified Series Cobra H.I.S.S. vehicle. It’s a modern update of the original classic Cobra armored terror. I have instructed the HasLab Marketing team to draft a comprehensive list of features that is readily digestible by even the most provincial layman:

What H.I.S.S. would be complete without its Driver? This G.I. Joe Classified Series figure included in the base offering comes ready for action, with multiple points of articulation for high poseability along with 4 weapon accessories. It comes individually boxed with its own artwork and number in the G.I. Joe Classified Series sequence, and will only be available through this HasLab offering. Anyone like me who cannot abide incompleteness in their collections should be certain to back this campaign to ensure no glaring omissions on their shelves.

Beyond this mechanical marvel I have developed, Cobra Commander has tasked me with implementing several potential enhancements to the base offering of the G.I Joe Classified Series H.I.S.S. vehicle. Scrap Iron and I are devising upgrades to expand its destructive capabilities. But that is all dependent upon the whims of our financial backers. Should enough investors fund the campaign, we shall reveal those Classified offerings in due time.

Congratulations, citizens of Earth! You’ve passed the firsssst step in proving your devotion to me, Cobra Commander, by successssssfully funding our HasLab Cobra H.I.S.S. campaign and reaching 10,000 backerssss, thus unlocking the FIRST Classified Upgrade! The Double Diablo Cannon accessories on your standard H.I.S.S. are indeed formidable, but Destro and Sssscrap Iron have been cooking up plans that will enssssure the Joes demise! Your Cobra H.I.S.S. will now include two removable, side-mounted missile racks, which telescope out from the vehicle. Each rack holds 6 MALHISS missile accessories! The weapons accessory pack upgrade is a perfect addition to your H.I.S.S. fleet and is sure to wreak havoc with the forcessss of G.I. Joe. But keep those orders coming, my friendssss, and we’ll see what else Cobra Commander can unearth for you!

Well done, faithful Cobra devotees! You just can't get enough of the Classssssfied Series, can you?! You've unlocked the next Classified Upgrade! I know ssssome of you "Real American Heroes" out there would prefer a retro insssspiration to your H.I.S.S. Well, Cobra Commander hasn't forgotten about you! Now, your backing of this project has earned you the H.I.S.S. Retro Pack! To display your H.I.S.S. closer to the classssssic 80s vehicle design, you'll get a swappable, single-piece canopy with a rear hinge that attaches to the cockpit, as well as removable retro armor-plating skirts inspired by the original 788 toy to go over your treadssss! 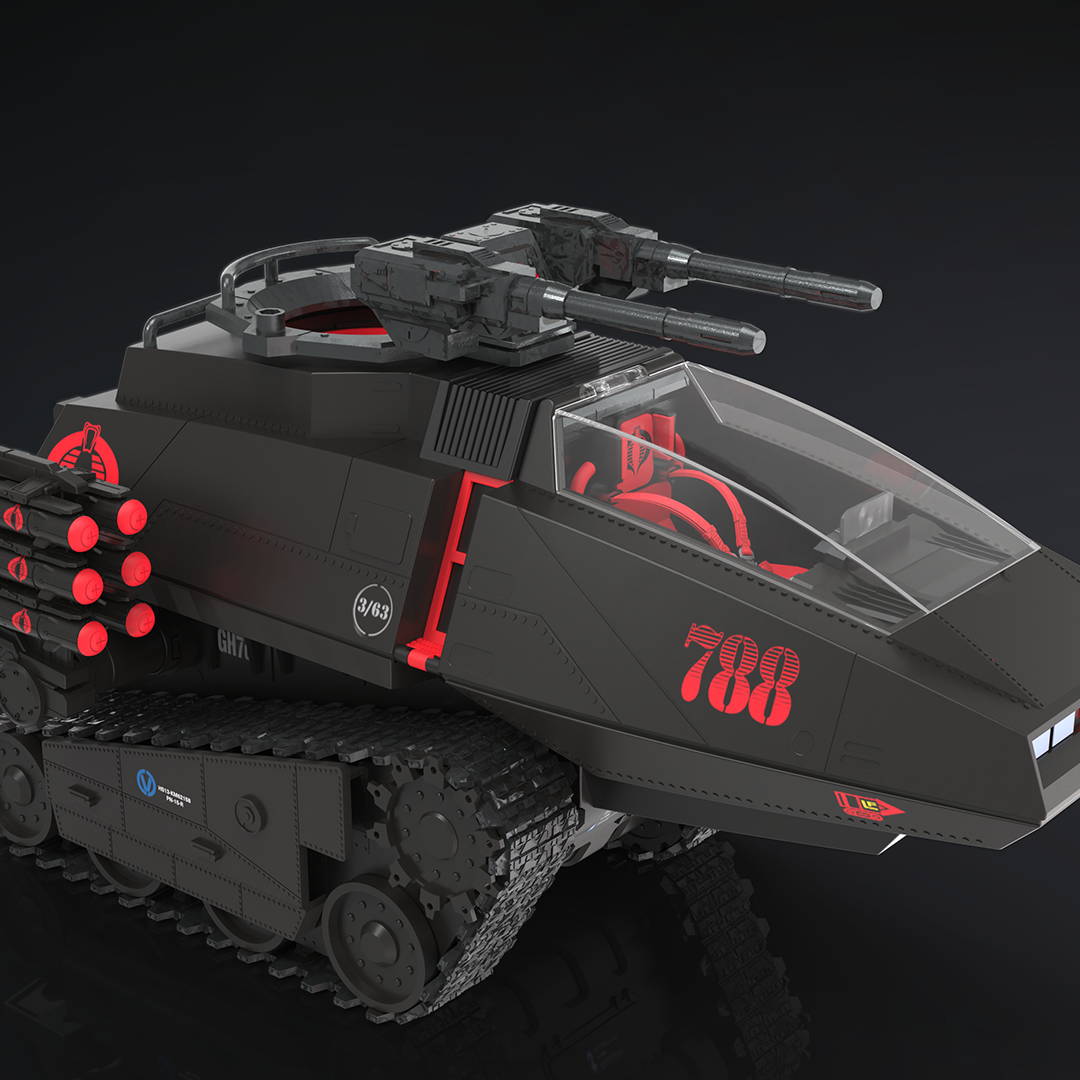 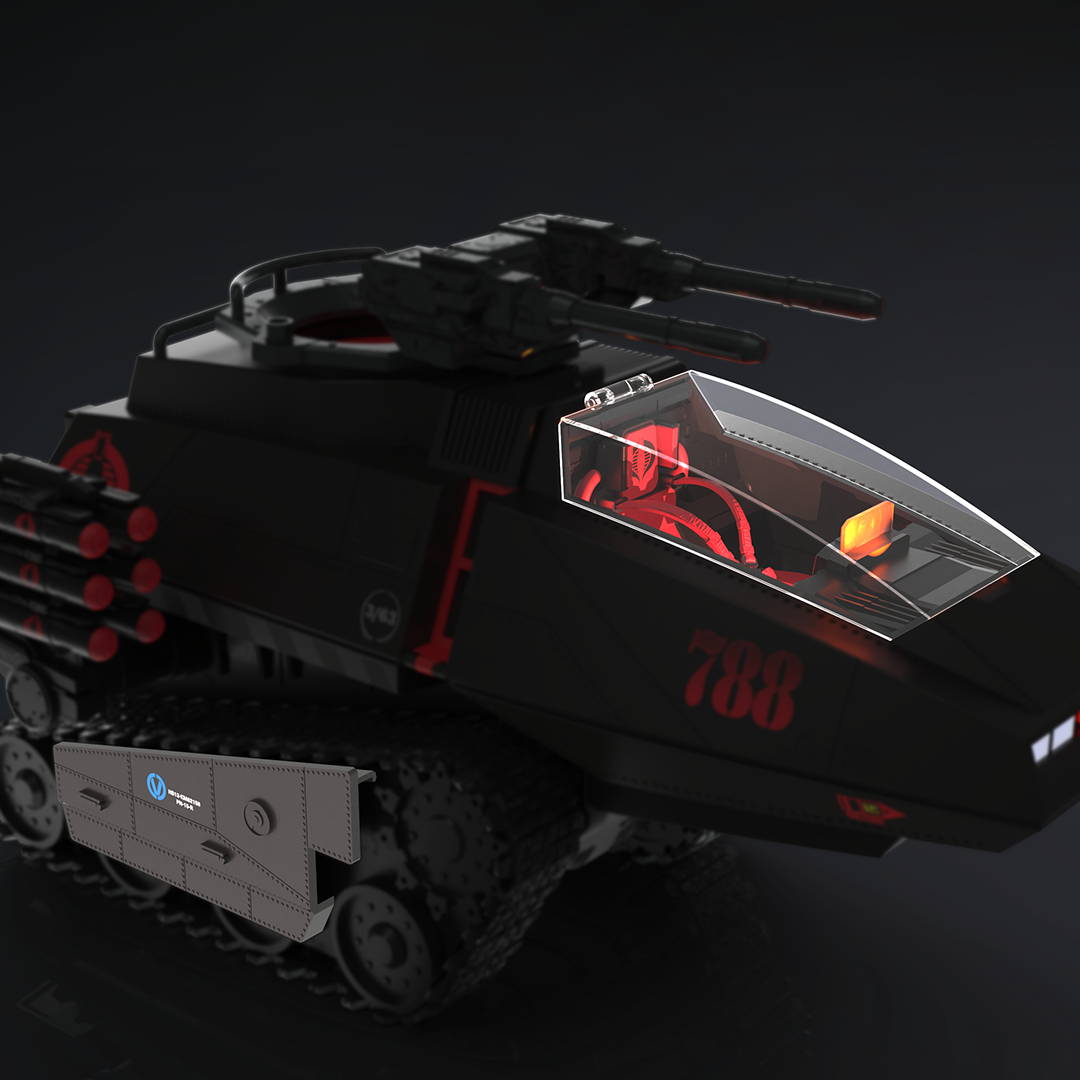 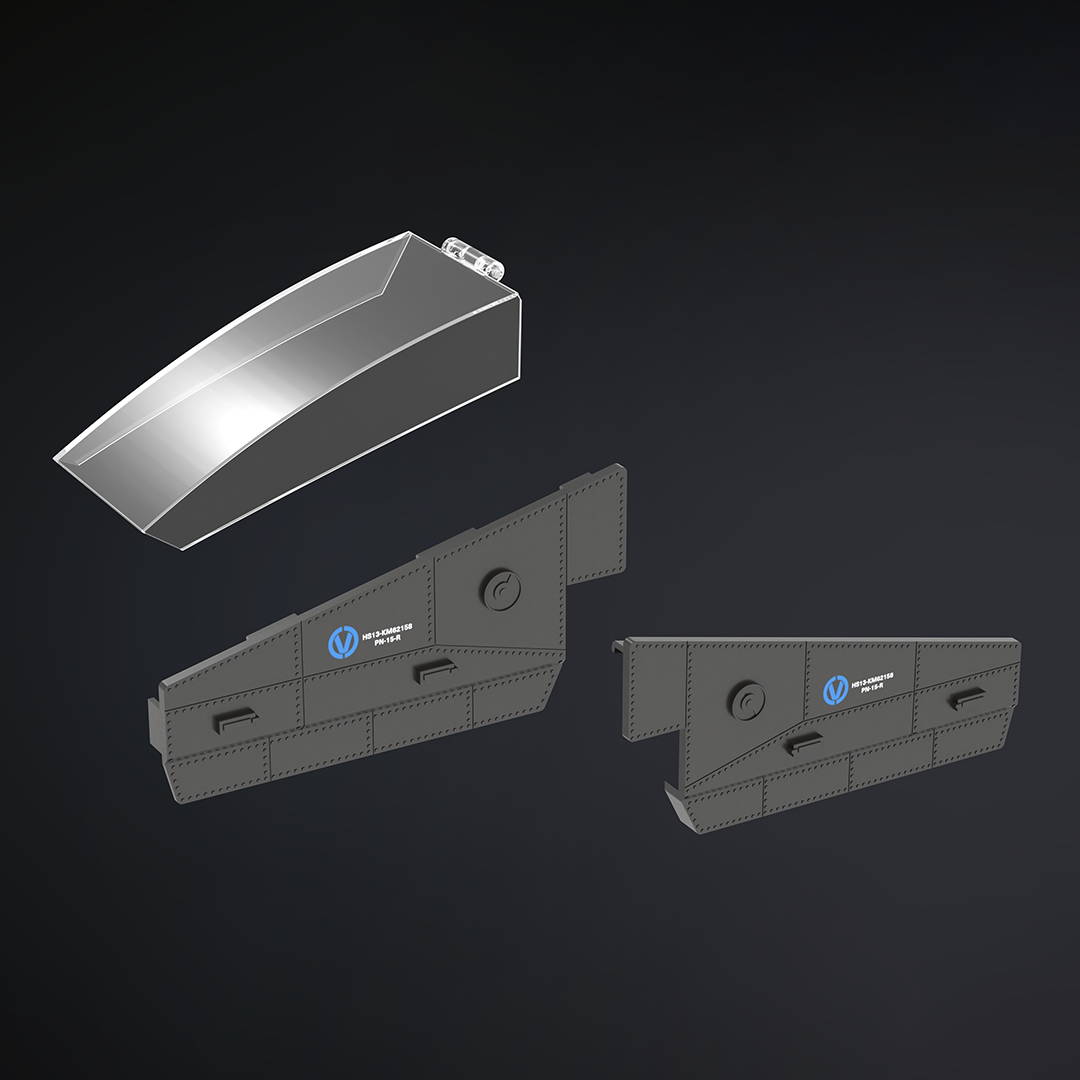 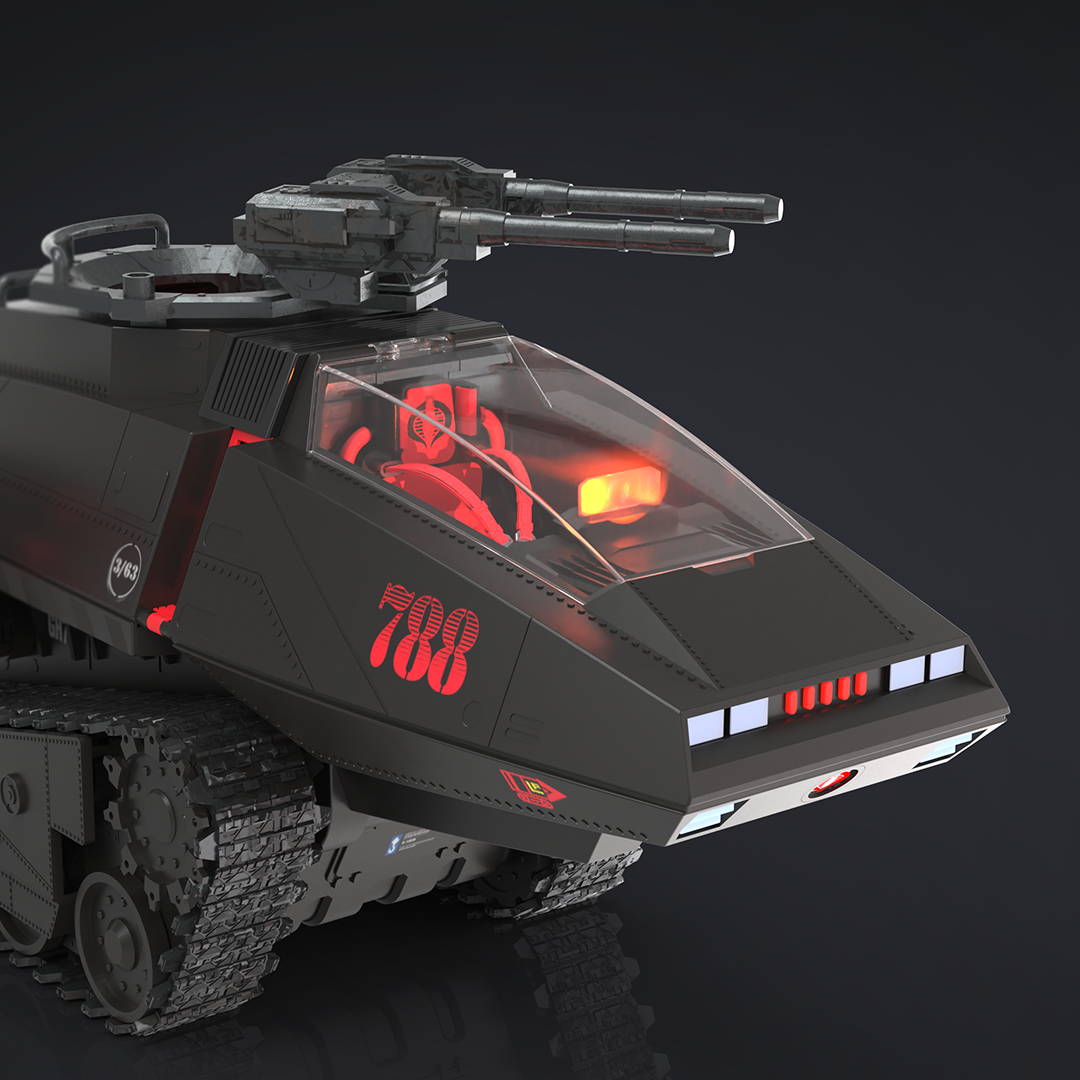 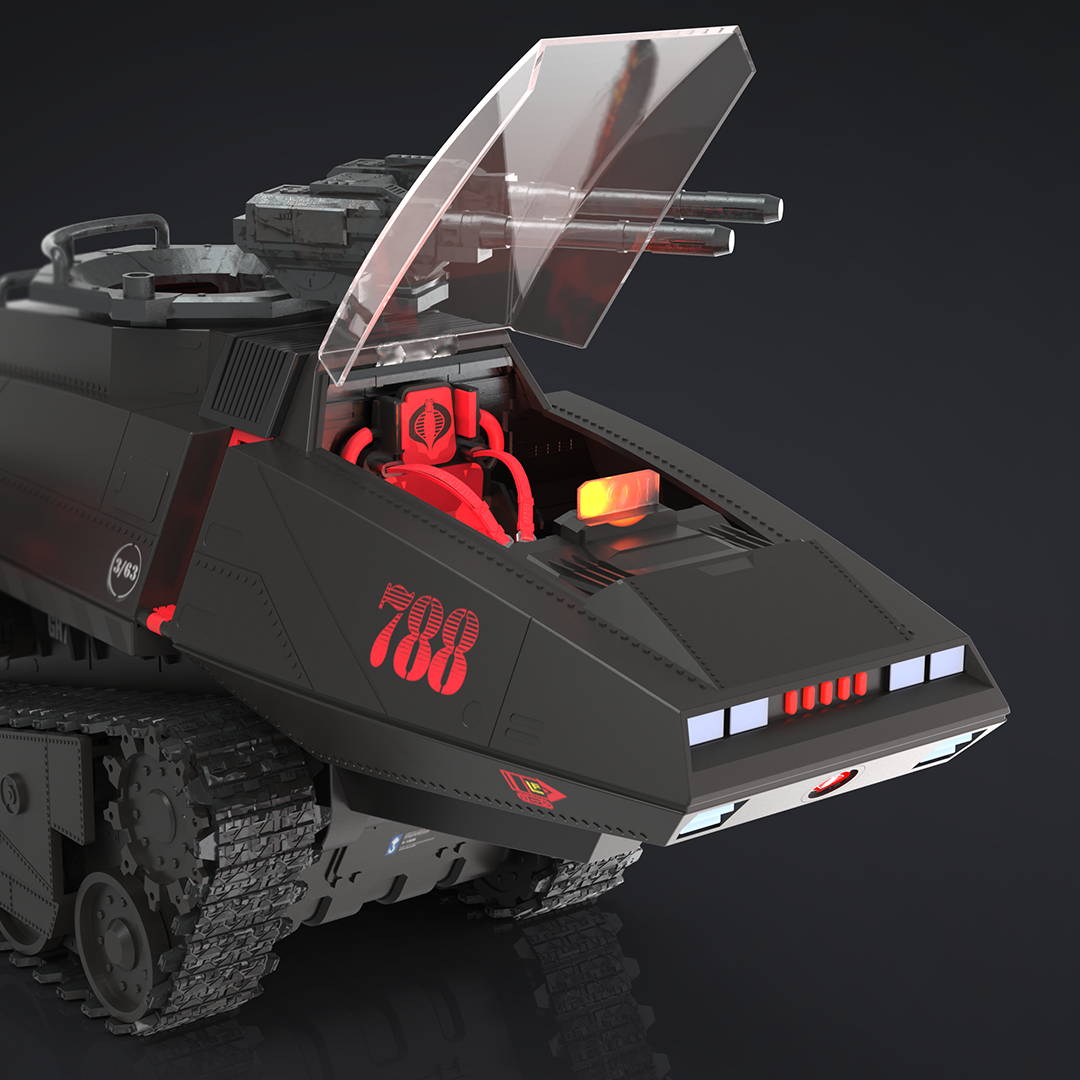 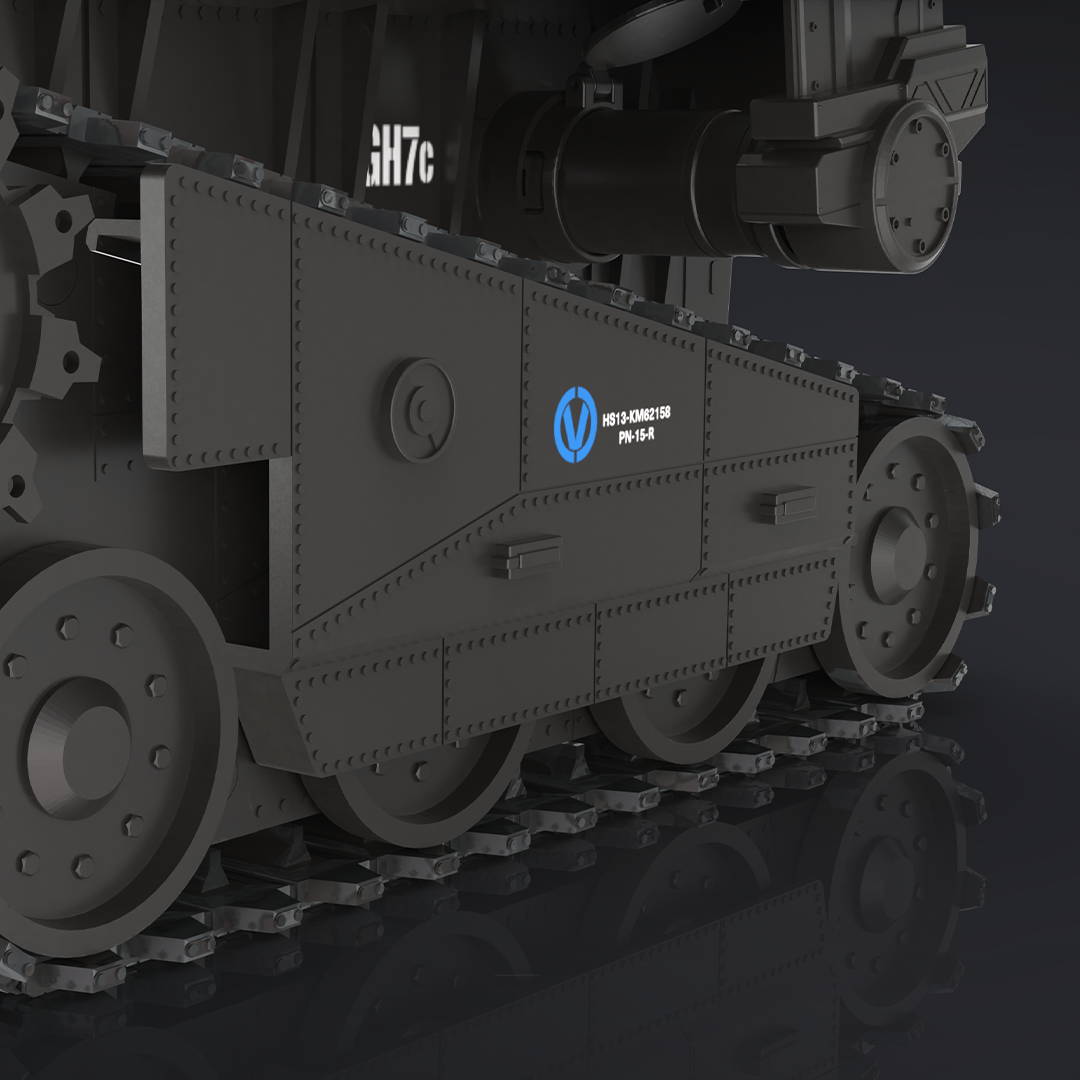 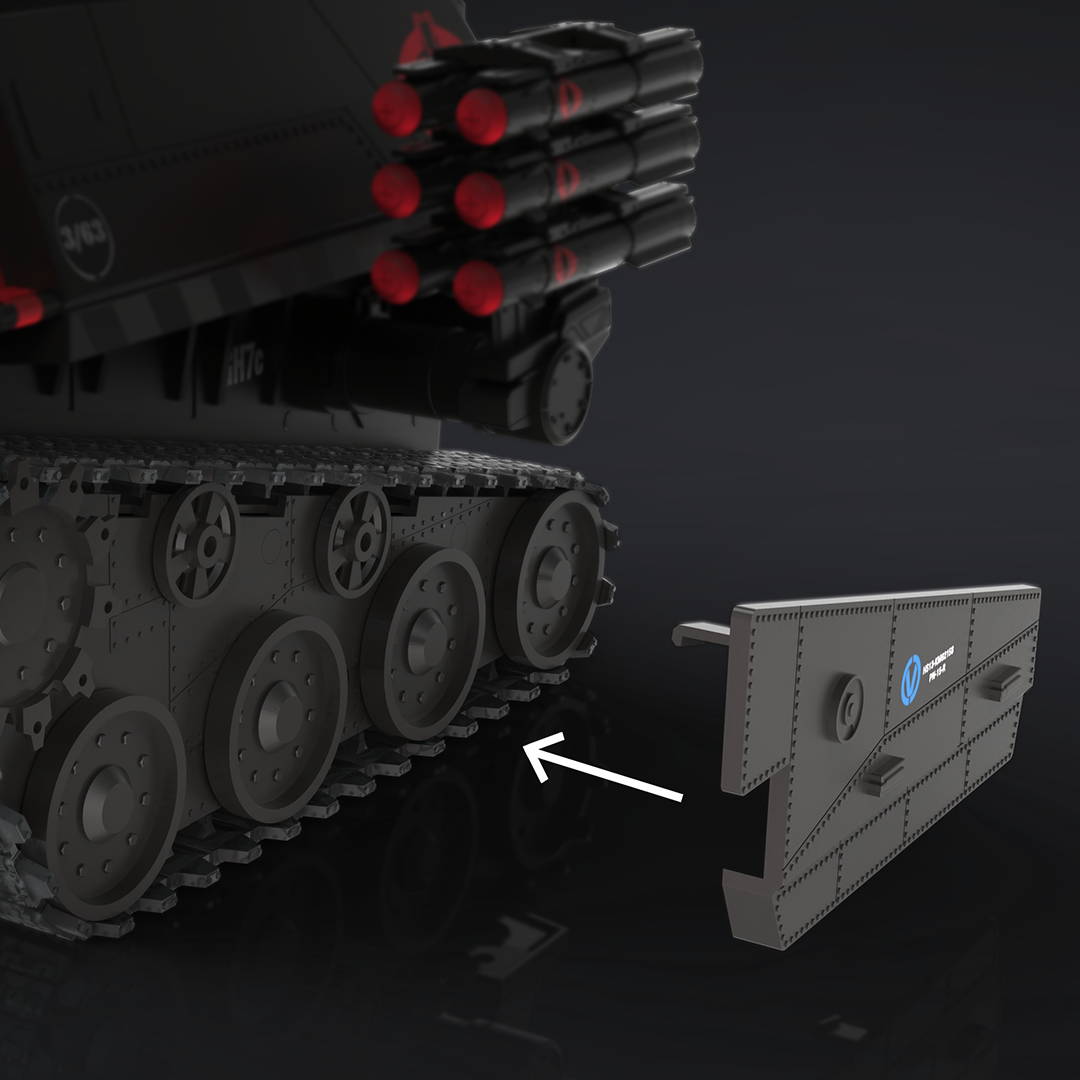 Astonisssshing! No matter what I offer, you jusssst want more! "Cobra Commander", you say, "Sure, my H.I.S.S. vehicle has enough firepower to bring cowardly G.I. Joe to their knees, but can it make them 'vanish' entirely?"

To that I say...of COURSSSSE it can! You've unlocked the Classified Upgrade #3 - the Weapons Accessory Pack AND the H.I.S.S. Gunner action figure.

You'll get twin HISSINTEGRATOR CANNON accessssssories, which attach under the nose of the cockpit, and two HISSRUPTOR ZX-5 blaster accessories that attach to either side of the H.I.S.S. turret!

A weapon is nothing without someone to wield it. Pose your H.I.S.S. Gunner figure at the controls of the articulated turret or wielding their weapon accesssssories. Adding a Gunner figure gives you a full complement of troops to staff your H.I.S.S. vehicle, and offerssss even more ways to display your H.I.S.S. fleet. 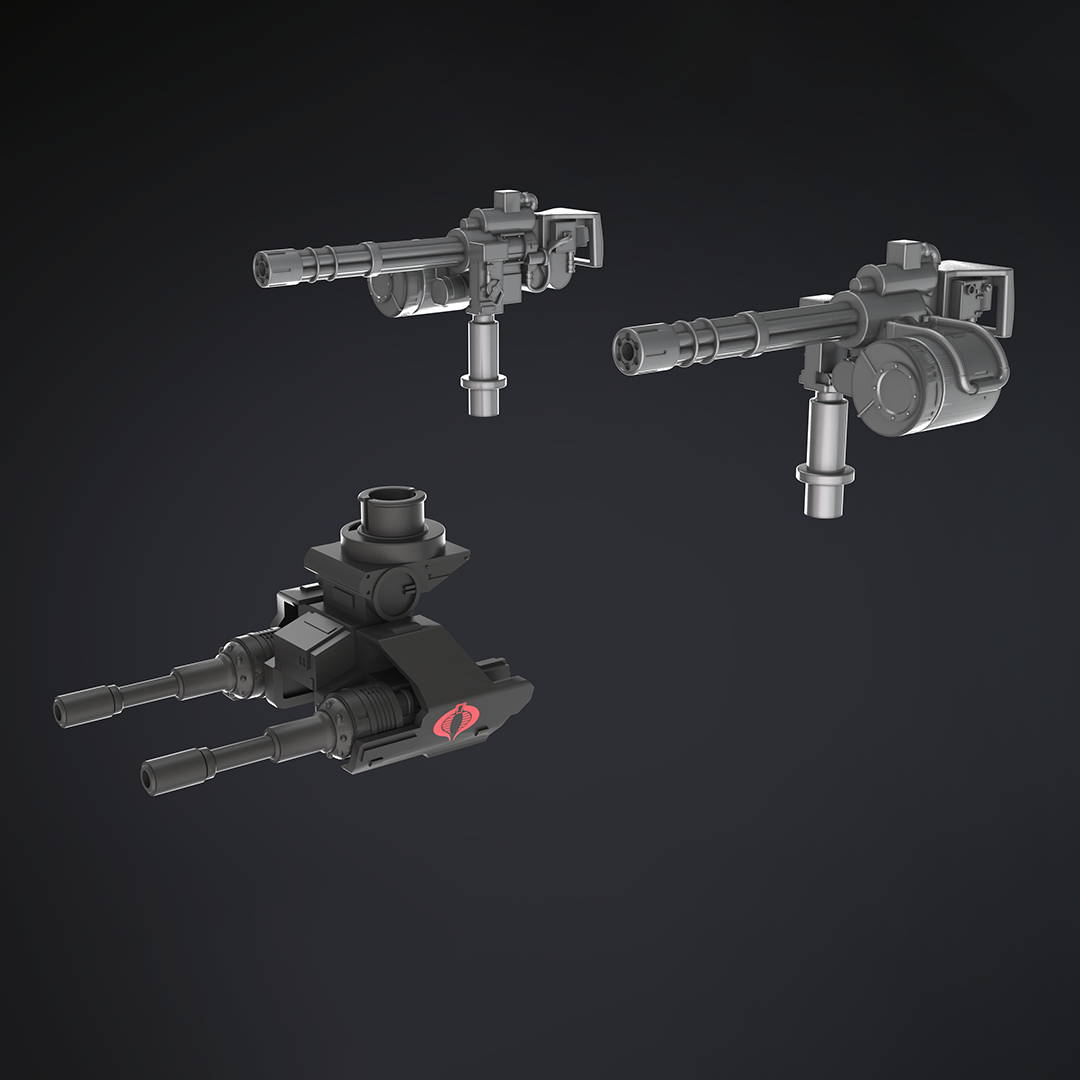 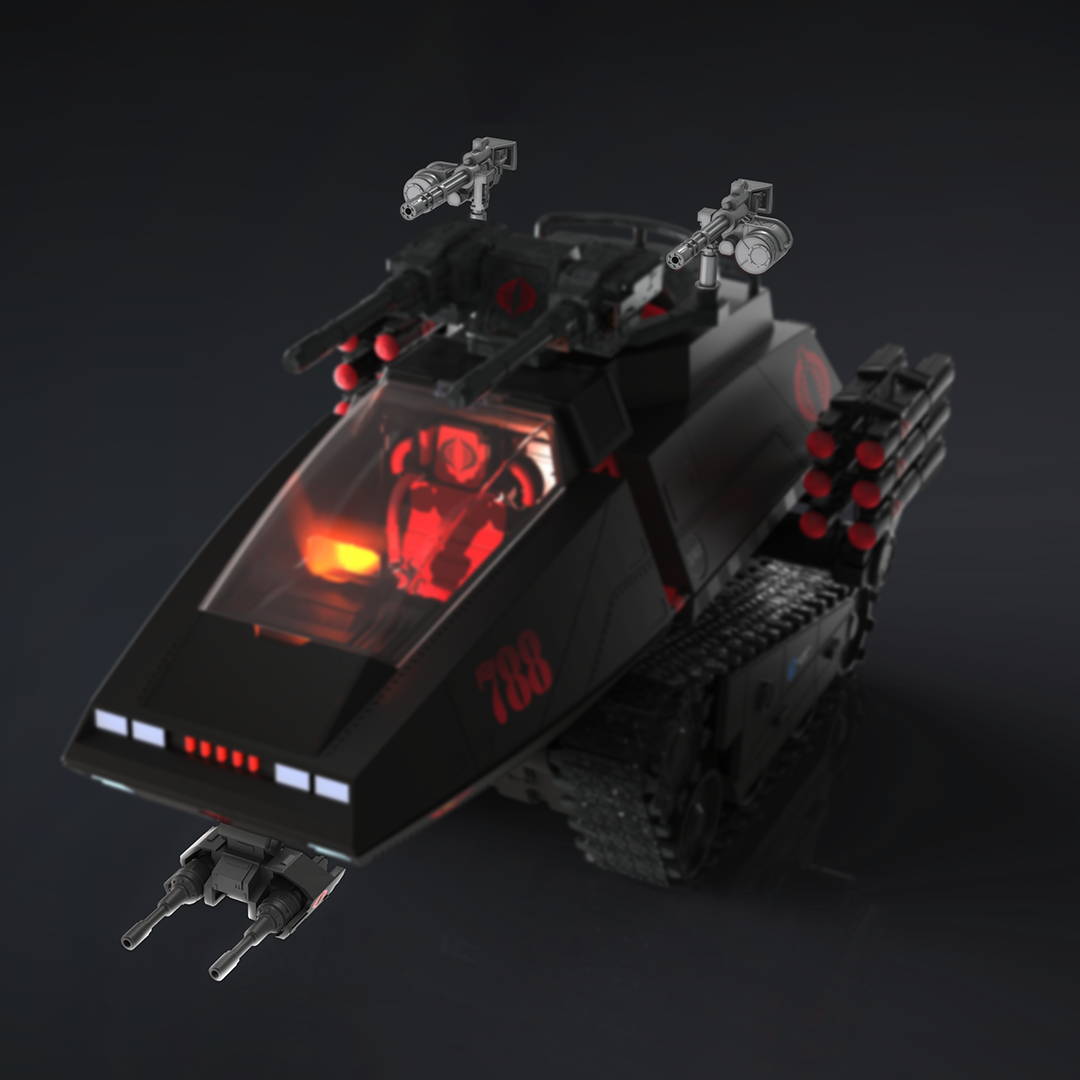 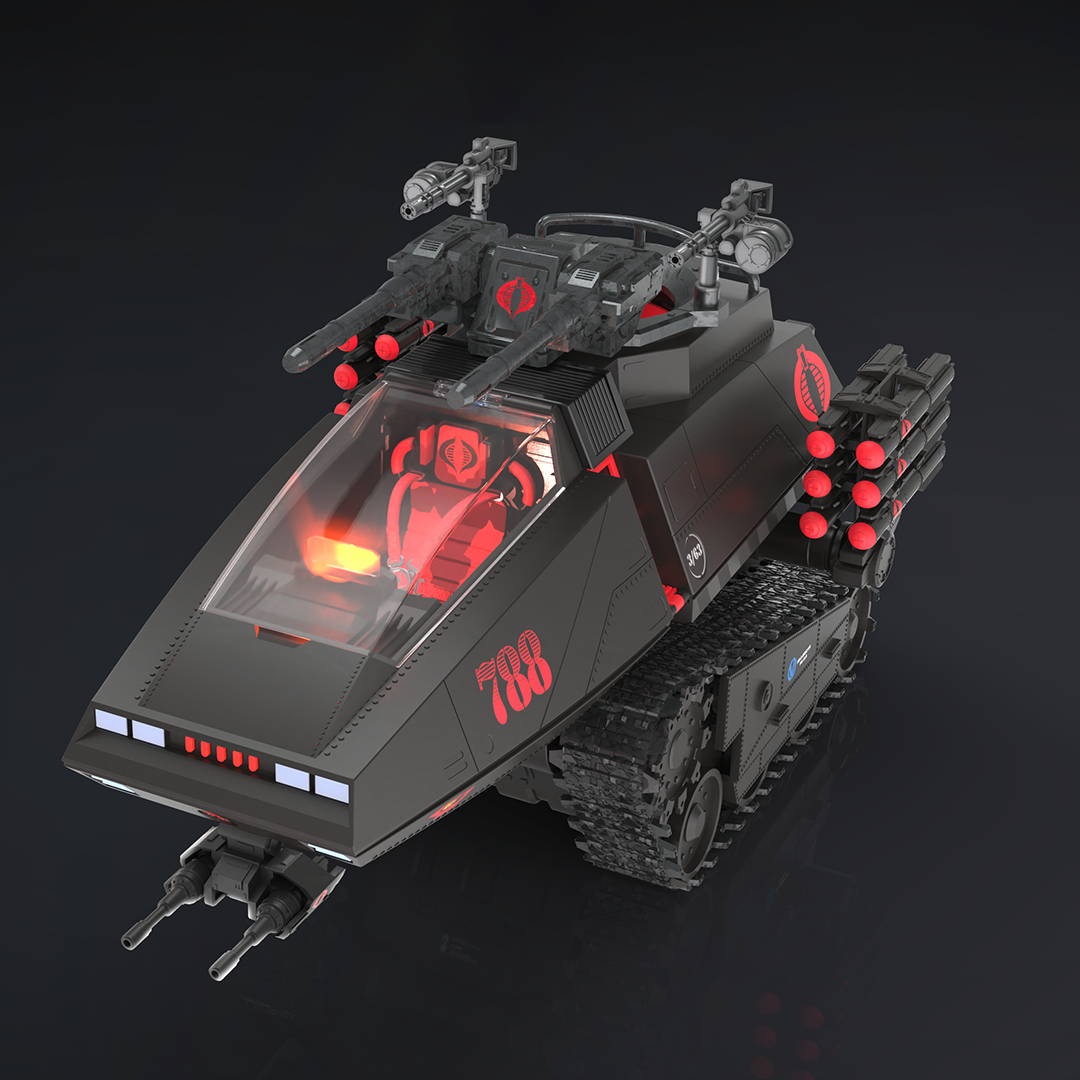 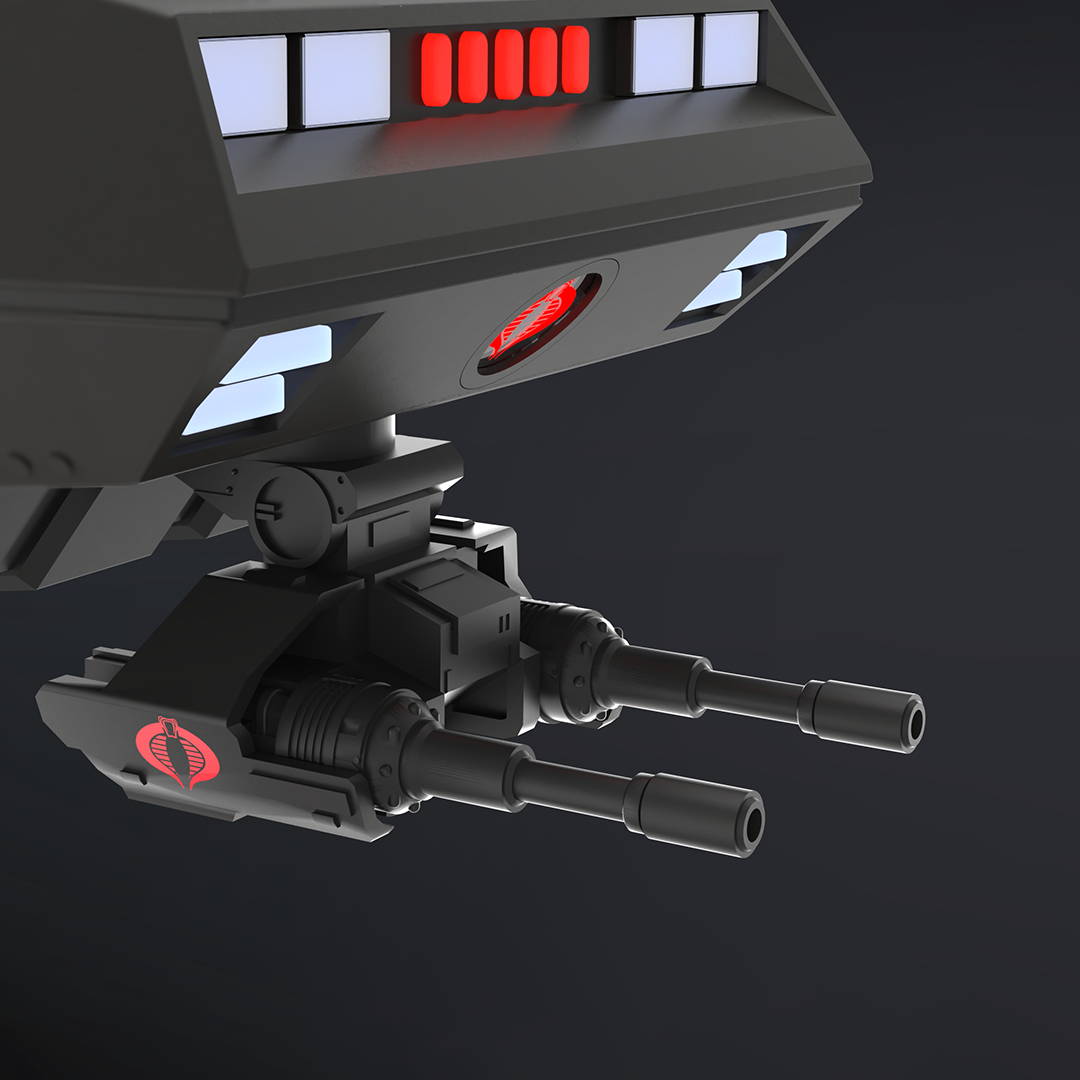 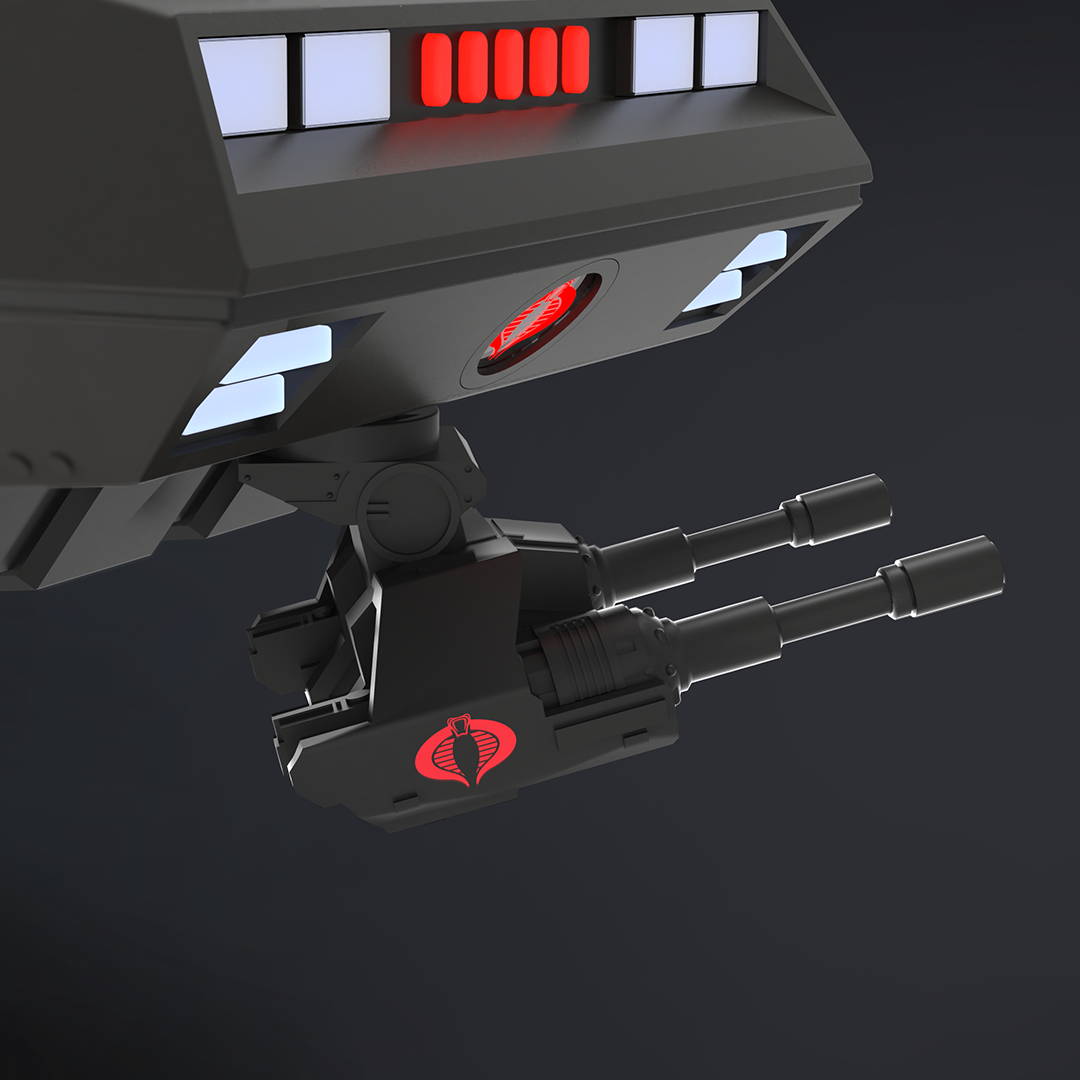 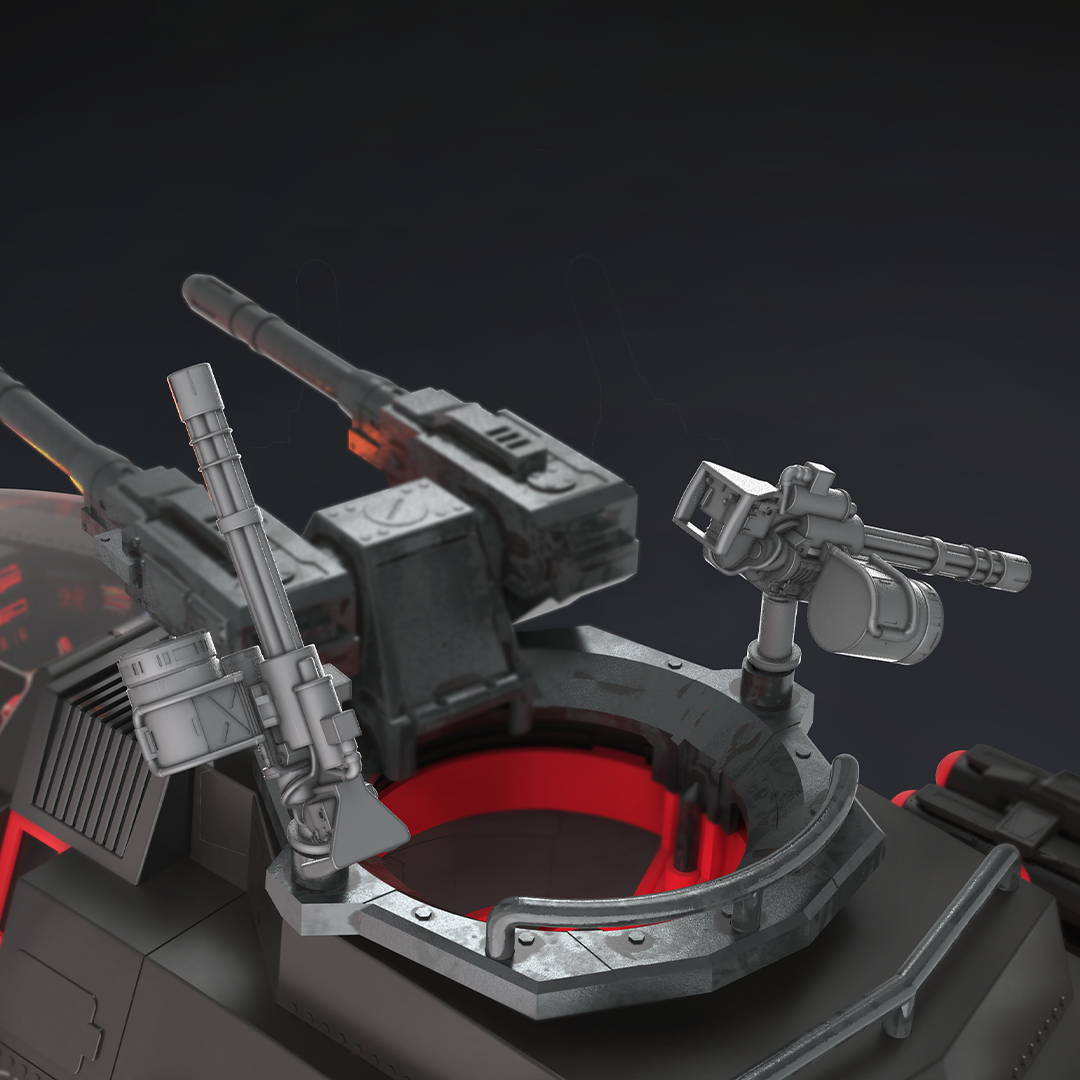 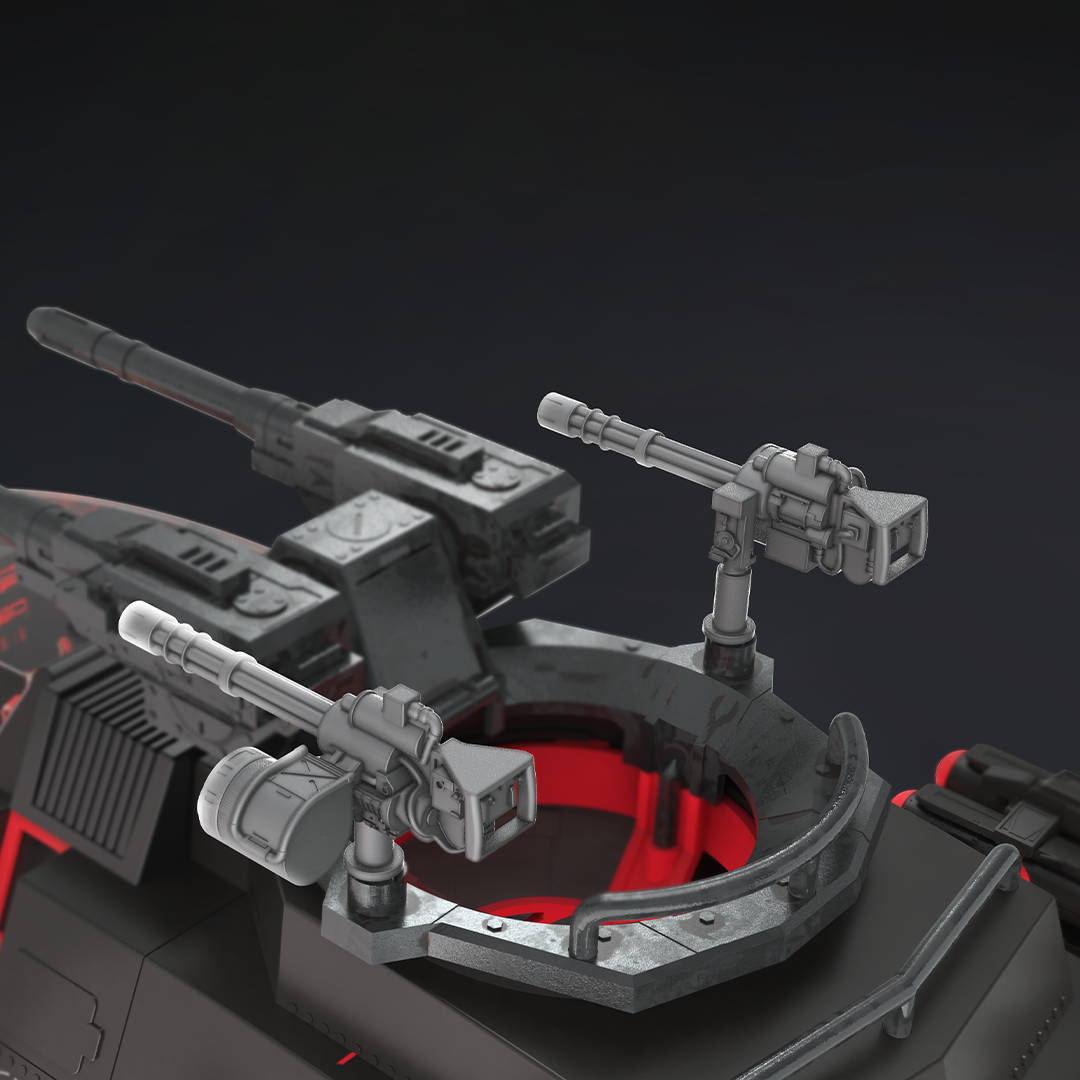 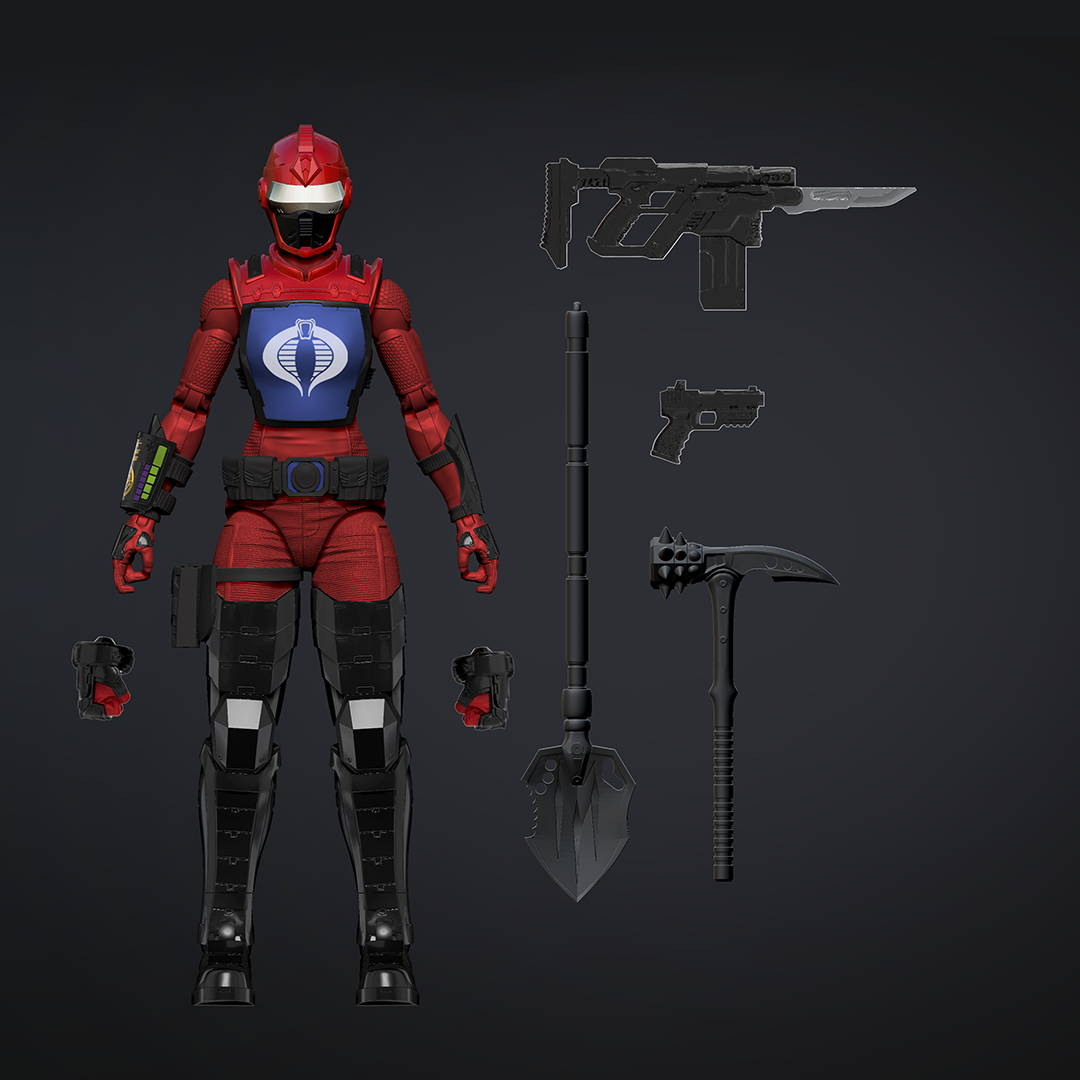 This G.I. Joe Classified HasLab campaign has been quite a roller coaster of a journey, hasn’t it, my faithful acolytessss? Every step of the way, you’ve surpasssssed all my expectations demolishing the initial offering and each unlock tier in record time. Your customizable H.I.S.S. now includes the base vehicle offering with H.I.S.S. Driver Action Figure, Early-Bird H.I.S.S. Tactician Action Figure, removable MALHISS Missile Racks, Retro canopy and tread covers, the newly-recruited H.I.S.S. Gunner Figure, the HISSINTEGRATOR CANNON, and two HISSRUPTOR ZX-5 BLASTER accessories. That’s cause for a celebration, and this year is the perfect time for a celebration in honor of me, COBRA COMMANDER!

2022 markssss my 40th Anniversary, and I want to commemorate that occasion with a trophy to my greatness. You've unlocked the Classified Upgrade #4 – a 6-Inch Scale Retro Cardback Cobra Commander Action Figure inspired by the rare missssprinted variant of my original 1982 “Real American Hero” figure release. Why Retro Cardback, you may ask? BECAUSE I’M the leader of this club. This figure is made for me! I want to be able to see my shining helmet through the blisssster pack and revel in my ressssplendent portrait.

Such a momentous depiction can’t posssssibly be slapped together with reussssed parts and pieces. I recently “sequesssstered” the HasLab team and insisted they create an all-new sculpt to capture me in all my 1980s glory. I’m certain it will inspire future statuessss and monuments throughout the world. My figure comes with 8 accessories including alternate hands, a backpack holster for my venom blaster accessory, and a miniature globe with my pet cobra. It’s a small world, but I will wrap my coils around it and squeeze it into total submission. Plus you can pose my figure astride the tail board at the rear of the H.I.S.S. as we roll on to victory!

The Baroness is fond of reminding me of that insipid platitude of the early bird getting the worm, but in this instance, it seems rather fitting. As a means of incentivizing backers to ensure the successful funding of the H.I.S.S. project early in the campaign, our HasLab partners have concocted their own devious schemes. If the project fully funds by reaching 8,000 backers within the first week of launch (before 04.59AM BST on Thursday July 7th), everyone who backs the H.I.S.S. HasLab project through the end of the campaign will receive an exclusive Cobra H.I.S.S. Tactician figure with deco inspired by the designs of legendary G.I. Joe designer Ron Rudat – the very man who put me, Destro, in an iron mask. Backers will get to help choose the color-scheme inspiration for the final deco of the Tactician figure once the campaign ends. And remember, each figure included in the offering is exclusive to the HasLab, and will be individually boxed with its own artwork, and number in the G.I. Joe Classified Series sequence. Should the base offering of the campaign not fund within that window, the opportunity to acquire your own Tactician figure will be lost forever.

The fate of the Cobra H.I.S.S. Campaign is in your hands

With the successful funding of the G.I. Joe Classified Series Cobra H.I.S.S. project I shall bring the world to its knees. But until then, its fate lies solely in the hands of the backers. They and they alone wield the true power to bring my vision to fruition. They must attain a minimum of 8,000 backers before the end of the campaign on August 16th or else Cobra shall never unleash its might upon the forces of G.I. Joe. We cannot allow those do-gooders to triumph. Let the countdown commence!