#HASBROTOYPIC/STAR WARS: Return Of The Jedi

Behind the scenes with TuskenMilkBar 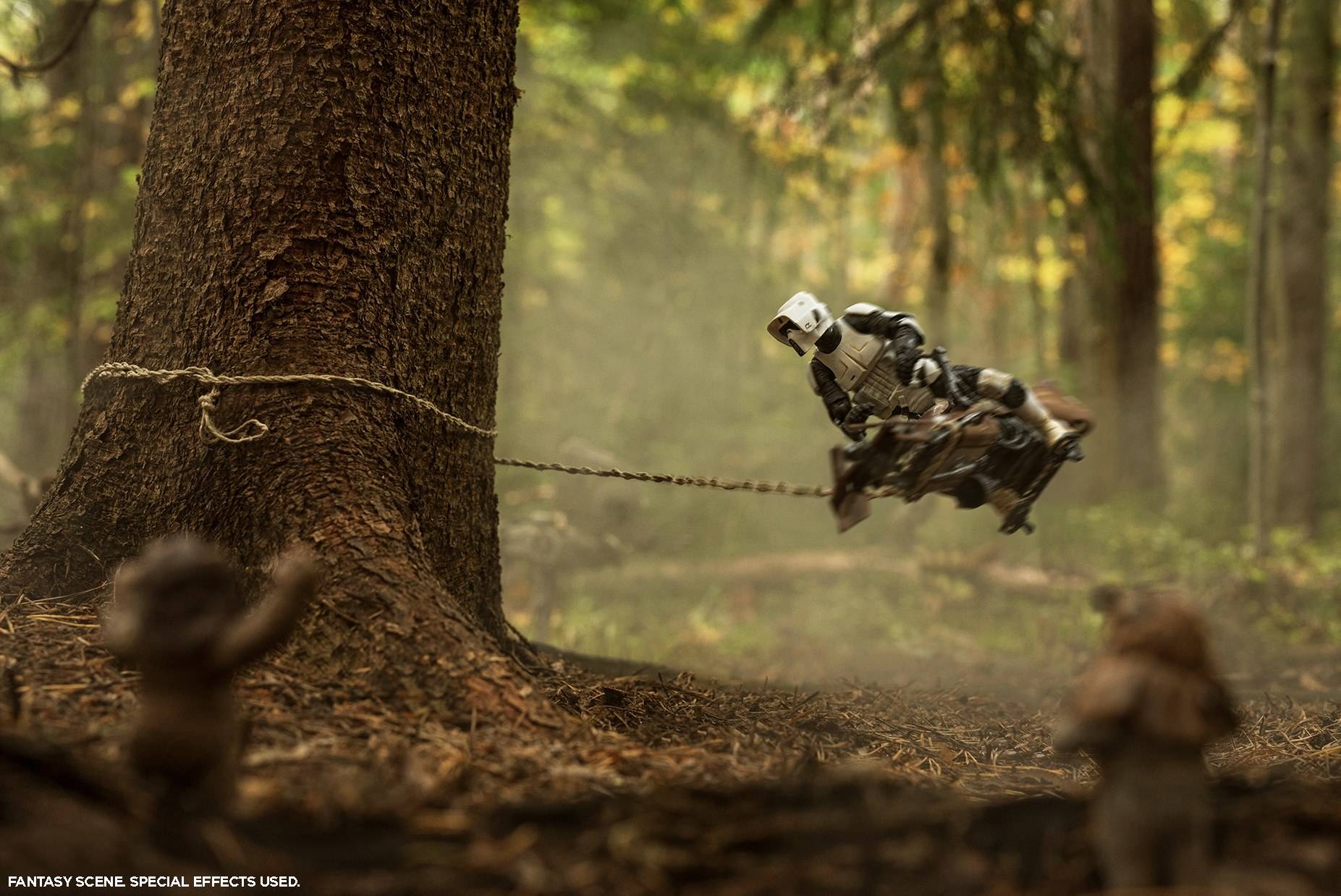 Your photo is amazing. How long have you been photographing toys? What was it that first drew you to this medium?

Thank you very much! I got my first Black Series figure, Chewbacca, four years ago and wanted to know more about that line of toys so I started searching Instagram for info and found this really cool community of toy photographers there. I thought I´d give it a try too and I´ve been hooked ever since!

As a fan and photographer it´s huge for me to get an assignment like this from the company that actually makes these toys. I got my first Star Wars toys about 35 years ago and Star Wars has always been a big part of my life. I´m really going to miss a lot of the characters and adventures from the original Star Wars saga, and I really have enjoyed going back to Return of the Jedi and Endor in this assignment.

When I first watched the original trilogy a completely new world opened up with amazing characters I've loved ever since. My inspiration comes from those early memories, it´s hard to say what it is exactly, but I always keep them with me and a part of me can return back to those days when I'm photographing.
~ Thomas Eriksson 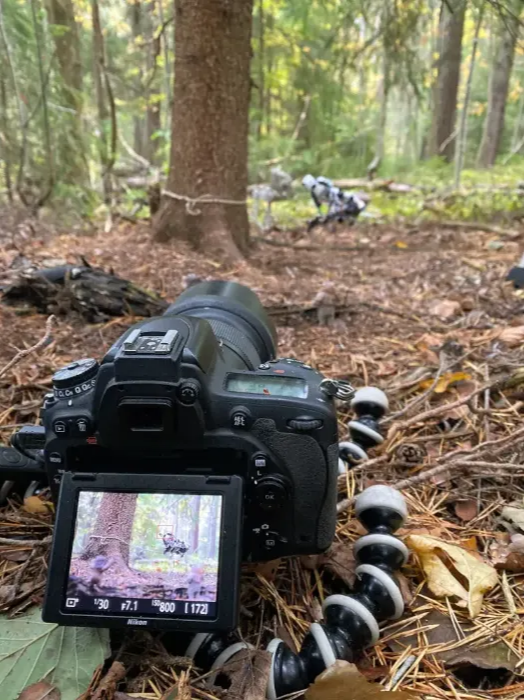 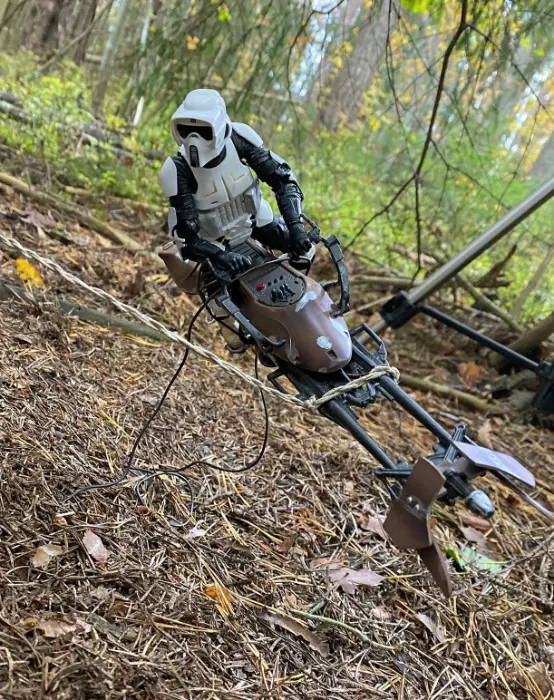 The battle of Endor is a classic battle in the Star Wars saga and as a kid when I first watched it I thought the ewoks had some very creative ways of fighting the Empire. The Scout Troopers on their speeders has also been one of my favorite figures for a long time but I've never tried this scene from the movie before.

It´s a challenge to try and get everything right when recreating movie scenes while at the same time make it with your own style. In addition, a big challenge with a shot like this, is to find the right location. The tree has to be in the right size to scale properly with the figures, and the surrounding trees, grass and background have to look right in the photo. I went to two different forests for this before I found this spot. Once I decided on a location I make some some test shots in different angles without any figures in it to see if my decision for the spot is right, and to get a feel of how the shot will look in the end. I also try some different settings on the camera so I will know which one to use. After that I begin setting up the scene.

I´ve done a few shots of the Black Series 6” speederbike “floating” in the air before so I knew to bring some steel wire to wrap around the bike and figure to make it stand on the ground with just the wires supporting it. I wanted it to look as natural as possible; the speeder should look like it´s caught in the rope I made and tied around the tree. Several minor adjustments had to be made both on the position of the speeder and the camera angle before I started working on the Ewoks in the foreground. They are in a different scale though (The Vintage Collection 3.75) but I felt they scaled alright with the rest. Finally, I used some Atmosphere Aerosol smoke in a can to make the photo “come to life” a bit more. In post I use Photoshop to remove the wires and add some motion blur to the speeder. I also changed the colors and made some other changes to the photo to make it look a little more like a movie still. 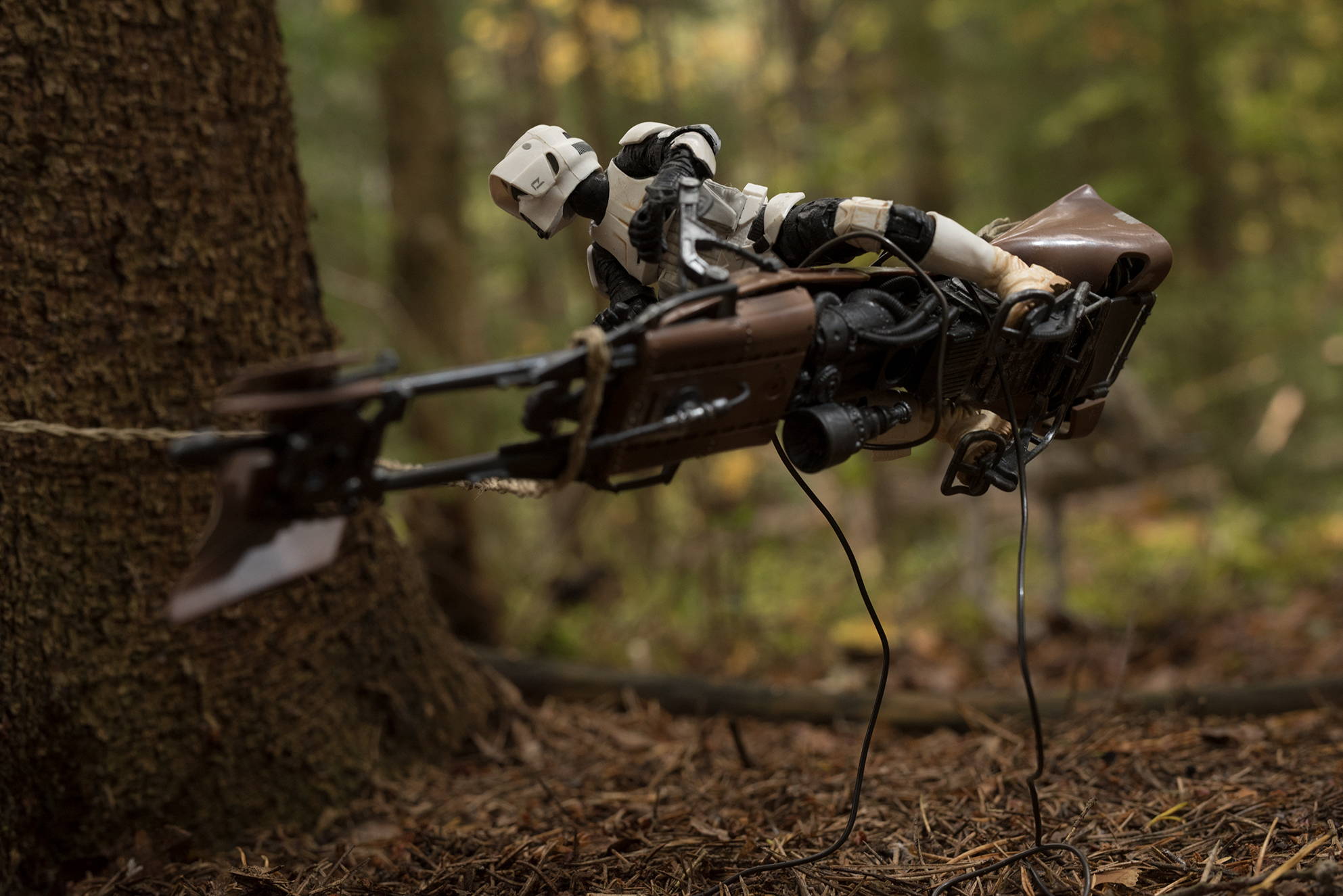 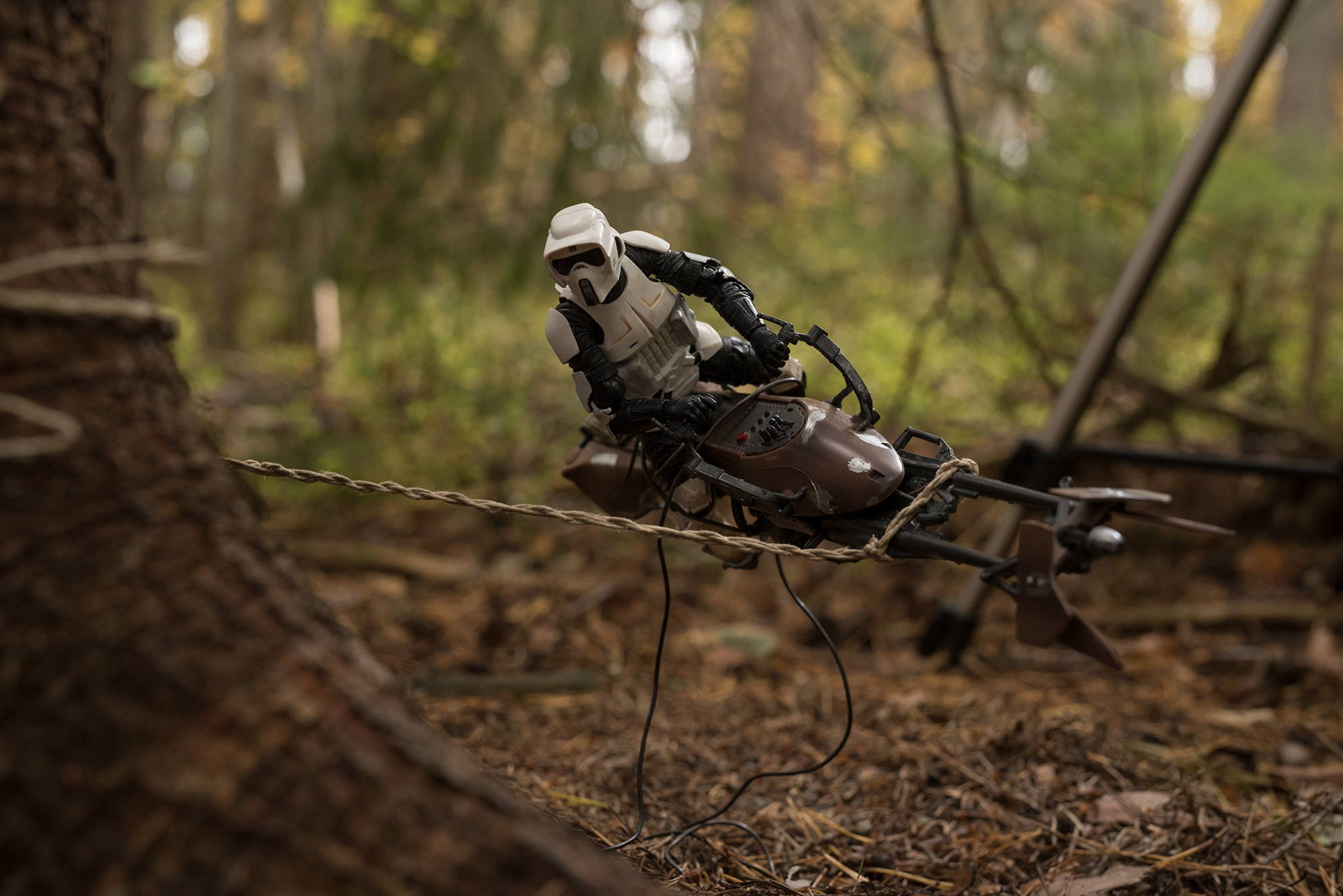 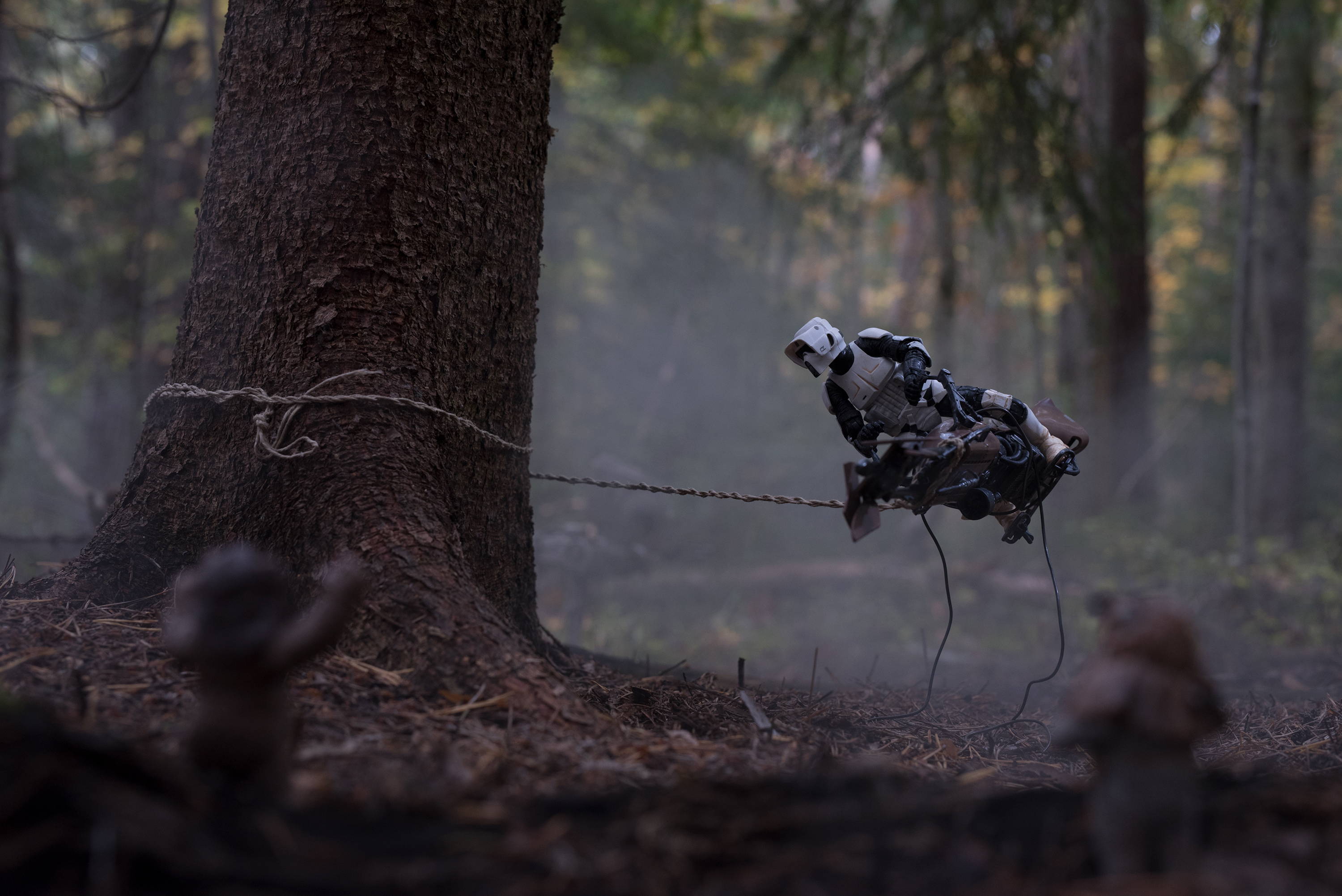 I started doing this for the love of the Star Wars movies and the characters in them, and I just try to have as much fun as possible doing it. For me it´s very satisfying to setup a scene and watch it grow into a finished photo, and being able to share it with people all over the world with the same interest as me. Getting feedback from other fans is really fantastic. If I can inspire anyone with my work, or bring back old memories, I´m really happy and pleased about it!

I just want to say thank you very much to Hasbro for this opportunity, I´ve really enjoyed doing this shoot and I hope you like the photo! And May The Force Be With You all!

This is Part 3 of an 8-part #HasbroToyPic/Star Wars series covering the epic battles of the Star Wars saga.